"It seemed like a step down. Back then, the Valley was a big oven with nothing in it, a great sea of nothing, an ocean with no ships and at night, if you went out there, were very few lights."

- Robert Redford on moving to Van Nuys as a teenager in a 1998 New Yorker interview. 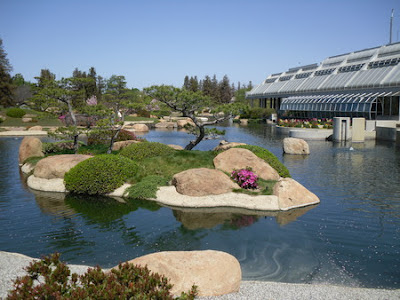 Sepulveda (taken from the family name of the early Angelinos) Basin is where San Diego Freeway 405 and Ventura Freeway 101 cross and you can catch a glimpse of the Sepulveda Dam. The positive legacy of the Sepulveda Dam is the huge undeveloped area used for wildlife and urban park. But the negative legacy is the river-turned hot dry concrete lined creeks, contrived to control floods. Unbelievable, but a 10 mile by 20 mile rectangle at the northwest corner of Los Angeles was once a lake fed by 4 rivers. As it is well known, the disheartened Los Angeles River story dates back to the California water wars fought in the 1920s.

William Mulholland (1855-1935), whose name we see in one of the
Santa Monica Mountain drives, was the Director of the L.A. Department of Water & Power. He sought water from the Owens Valley and built the famous 400 mile-aqueduct that helped L.A. emerge as a metropolis but met staunch resistance by Owen's farmers as common water users (river and rival etimologically related). The famous Roman Polanski's movie Chinatown dealt with this subject. Mulholland had to resign in disgrace when the dam he built in Santa Clarita collapsed and flooded downstream killing hundreds of people. While water was secured, local rivers of L.A. were lost in the name of flood control.

Back to the Sepulveda Basin - as if to redeem the past defamation of rivers lost, there is a gorgeous, spacious 80-acre land with multiple parks, golf courses, bike paths and one of the few soft-bottom sections of the river hidden behind the dam. The centerpiece of the park is the 27-acre Anthony C. Beilenson Park, known previously as Balboa Park and a wildlife refuge. Recreational activities include fishing, boating, jogging/walking. Woodley Avenue Park has a children's play area, picnic tables, barbecue pits, baseball diamonds, archery range, cricket fields, etc.

Then there is the new and very innovative concept of a combination waste-water treatment plant and Japanese garden "Suihoen" (Garden of Water & Fragrance) on a 6.5 acre land with 2.75 acre lake, which I visited recently accompanied by my daughter on the way back from Little Tokyo to her Thousand Oaks home. We drove back and forth on Woodley Avenue, finding it difficult to find the entrance. There is no sign of a Japanese Garden at all from outside. The reason for that is the tall wall surrounding the garden, hiding everything within. Security probably is another good reason, as the garden incorporates the reclamation plant. We went through a well guarded house, then onto the garden shop to get a tour map.

Usually, I do some homework before visiting any place of interest. I confess that I didn't know Van Nuys had a Japanese Garden until my daughter suggested that we drop in. 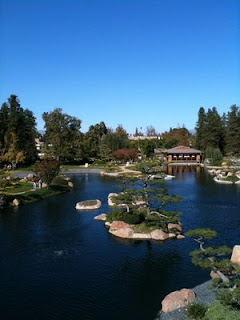 Frankly I didn't expect much, but I was totally enthused once I stepped into the garden. I was involved in the planning of a 5-acre San Diego (Balboa Park) Japanese Garden as a representative of a major donor company, sitting on the Board of Directors in the l980s. The Van Nuys Japanese Garden was in progress a decade earlier than the one in San Diego. The Van Nuys garden had some very powerful and illustrious supporters including Donald Tillman, City Engineer of Los Angeles from 1972 to 1980 and Dr. Koichi Kawana (1930-1990), a Hokkaido native, garden designer & architect, professor and mentor of Donald Tillman at UCLA. I read that Donald C. Tillman was responsible for the original concept of a combination waste-water treatment plant and garden, and he continued to lobby for federal funds to build the garden, even visiting President Richard Nixon, accompanied by the then maverick L.A. Mayor Sam Yorty (1909-1998).

President Nixon from California was reportedly moved with the unique concept. The garden was dedicated in 1984 and the reclamation plant was named after Tillman. The facility, since the dedication, received many awards for design – at least one every year, two in some, until 2010. My immediate impression was that it resembled Korakuen Garden in Okayama. Perhaps Dr. Kawana was influenced by it during the conceptual phase.

I've never seen a Japanese garden with so much water outside of Japan. Usually water is the critical element for building a Japanese garden and major part of the building expense. Tillman reclamation plant supplies reclaimed water to the entire Sepulveda Basin and the Japanese garden in particular is the showcase. 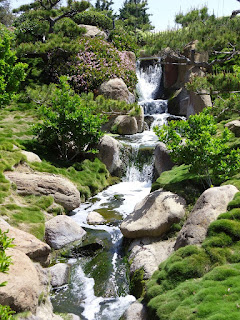 I don't hesitate to say that the Suihoen is one of the best gardens in the U.S., definitely among the top five. You certainly enter into another world with lambent sky, sweet air, a view facing Tortoise Island, both dry and wet gardens with blocks of rocks and stones, well combed pebble and sand surfaces. You get a serene retreat from the snarled traffic, therapeutic comfort in seeing well-trimmed pines and bamboo thickets, water fowl, colorful Koi carp, and relaxing in Zen style meditation. Mini stone lanterns, gifts from the sister city Nagoya, are well positioned throughout the garden. Just inside the tall walls is the oblong moat, or reflection pond, brimmed with water, connected with intricate garden lakes. You reach the Shoin Building through the Heavenly Bridge (make-believe Amano-Hashidate), on the opposite end of the garden which incorporates a tea-room with tatami.

The tiled building is available to host events with catering tables. It has half-Shoji and half-glass window to view the lakes. The Sukiya style arbor has a California Redwood table top. You walk by the waterfall and Crane Island (paired with Tortoise Island) floating on the lake and enter into the modern and futuristic Administration Building of the Reclamation Plant with the national flags of the U.S. and Japan hanging from the ceiling. There are video displays that explain how the reclamation plant functions, which is also viewable on their Web site (see Notes).

I read that Star Trek shot episodes there and the facilities were used by a number of scientific conferences with nothing but positive comments from all the attendees. I hope the local Japanese-American community actively participates in supporting the garden in the spirit of this magnificent trailblazing landmark.

1. Aerial view of the Suihoen and Tillman Reclamation Plant

Mission: "Protect public health and the environment"
Motto: "Working hard everyday for a sustainable LA"
Creed: "An organization that sets the benchmark for outstanding service and responsible to the challenge of tomorrow"
Posted by riodan at 2:41 PM 3 comments: 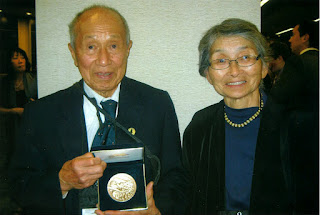 On November 2, 2011, the long awaited Congressional Global Medal (CGM) presentation was held in Washington D.C. to hundreds of Japanese American veterans who collectively fought bravely during World War II. There were fanfare, ceremony, many speeches including one by President Obama amidst applause of many well-wishers and families.

Japanese Americans fought to prove their faithfulness to the U.S. while their parents, brothers and sisters were detained behind barbed wire. For those veterans who were unable to join in the Washington event, CGM presentation moved to the local state and city levels in succession, starting in Hawaii (Dec 21), Washington (Jan 12), Utah (Feb 18), Oregon (Feb 26) and in cities of Monterey (March 4), San Diego (Mar 11) and may go on until the end of June to honor all of the veterans. Most veterans are aged over 90 and when they reflected on their brilliant past, great stories were retold, inspired by the media. This is the right time and moment – the CGM Moment to share.

The photos in question are super shots and once I saw the photos, something told me to share them with the public at large. I received permission from the owner of the photos, Dr, Koide, one of the collective recipients on November 2, 2011 in Washington D.C. Dr. Koide was assigned to the Military Intelligence Service after attending the Defense Language Institute at the Presidio in Monterey. MIS honors were delayed because of security concerns.

I became interested in his life before and after the war. A biomedical researcher and a native Hawaiian, he went to McKinley High School and the University of Hawaii. Dr. Koide earned his MS, MD and PhD from Northwestern University; he contributed over 300 research papers, helped over 30 post-doctorate candidates, including one of our mutual friends. I heard Dr. Koide inherited Dr. Hideyo Noguchi’s (1876–1928) legacy at Rockefeller University, as promoter of Dr. Noguchi’s Memorial Hall and statue on the campus. Dr. Koide received the distinguished Alumni Award from the University of Hawaii in mid 2000.

Last, but not least, Dr. Sumi Mitsudo-Koide was an internist at Minidoka, Idaho Concentration Camp. She studied at Swarthmore College and the Medical College, both in PA. She was president of Japanese American Citizens League, New York Chapter, served on Westchester County Women’s Advisory Committee and was elected to the Women’s Hall of Fame in Westchester.

Dr. Samuel Koide has been an ardent New York marathoner for many years and whenever he runs lately, Dr. Sumi Koide makes sure that he carries an envelope containing her message: “In case this man happens to suffer illness or injuries, here’s taxi fare to carry him to the nearest hospital.”

The above information is mostly gathered from sources online and if any misinterpretations were made, the blame should solely be on this blogger (with my apologies in advance). 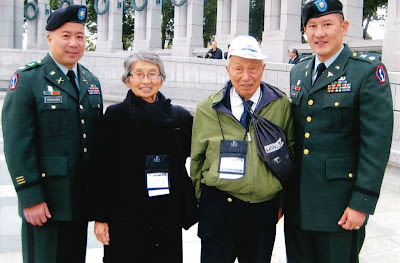