My friend in the Tokyo suburbs brought me unexpected news. A small fire flickered in his town to read Dear Miss Breed, the story of a humane San Diego librarian who kept sending books and miscellaneous items to the Japanese American children in the concentration camps in America during World War II. I was told that a group of women who were intrigued by the story started the project.

I have no idea how it developed, but my friend probably made some reference to the book in his club talk or by some unexplained circumstances. They decided to read the book in English. They searched for Joanne Oppenheim's book published by Scholastic New York. They found only one copy at the National Diet Library in Tokyo. The inconvenience was that the city library had to serve as an intermediary and the book could not leave the city library. It had to be read at the library premises under supervision of a city librarian or staff member. Lately, there have been reports of book vandalism in libraries of Anne Frank's Diary for some reason. And then there was the National Diet Library lender time limit. So my friend reported that regretfully the book had to be returned without reading all of it.

I am keeping a few copies of the Japanese translation myself but gave away all of my English books to friends who helped me with the translation, and to the Marine Corps Air Station Iwakuni librarian who called me with her interest in obtaining a copy. I'm getting another copy myself, but not right away.

I looked through my old files and found a statement I made back in 2006, the year Joanne published Dear Miss Breed from Scholastic. Yes, my motivation was for the benefit of young Japanese readers who were unable to read it in English. I'm glad that I went back to ground zero of my Dear Miss Breed project. Thank you, ladies and my friend, who relit a fire again that originally inspired this project.

To whom it may concern,

This letter is to announce that I am now determined to translate Joanne Oppenhiem's "Dear Miss Breed" into Japanese for young readers to know the powerful story of Miss Breed. I look forward to the day when Japanese boys and girls acquire English language skills and can fully appreciate the author's original context.

I want Japanese readers to know, while they are as young as Miss Breed's children, that there was a remarkable librarian, Miss Breed, who loved the young disciplined Japanese Americans and gave them strength and inspiration while they were confined and isolated in the remote concentration camp during World War II. Access to the collections of touching letter writing by Miss Breed children will surely move the hearts of young Japanese readers.

Soon after "Dear Miss Breed" was published in April 2006, I expressed to both author and publisher, my desire to translate this most important book into Japanese. The publisher replied in June stating that I had to go through the Japanese book underwriter/publisher. I had a number of publishing houses in mind, but I realized that they would immediately ask for the manuscript, which I didn't have. I knew translation without a publisher's endorsement was risky, but I felt such a strong commitment to those whose letters I wished to translate. There is a Japanese saying "Knowing what is right without participating in it betrays one's cowardice". I am aware that there is a risk of losing some things in the translation.

I simply desire that the late Miss Breed receive recognition in Japan, as well as authors of letters who are still alive. I spoke with Clara Breed in the late 1980s, in the last stage of her life, when she was working as a substitute secretary for the San Diego Japanese Friendship Garden where I served as a Board member along with Joe and Elizabeth Yamada. Therefore, I can attest to the modesty and sincerity of Miss Breed. I met Ben Segawa and the late Tetsu Hirasaki through my membership in the Japanese American Historical Society of San Diego.

Translating and publishing "Dear Miss Breed" is my thank-you to the Japanese American community who supported the Japanese Friendship Garden and other projects I worked on intimately, including Minato Gakuen, a Saturday School for the Japanese expatriate children in the San Diego area.

Fortunately I have found a working partner who has greatly enhanced the attached sample translation through Page 16. I wish to complete the translation by the end of this year.

Your opinions or comments on my ambitious self-declaring venture will be greatly appreciated.

I wrote this in 2006, nearly eight years ago. How times flies! My objective was to alert the author, Joanne Oppenheim, and her publisher, Scholastic. I knew they wouldn't be persuaded unless guaranteed by a Japanese underwriter/publisher. I did all the promotion myself, sending a sample translation and the introduction of Dear Miss Breed which appeared in San Diego Magazine, and got a hit with one medium-sized publisher, a very cooperative 'Kashiwa'. 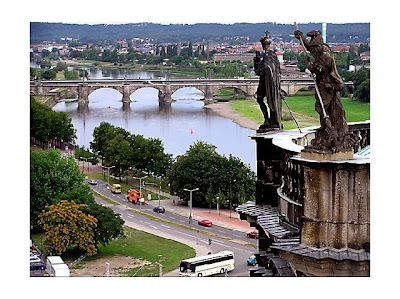 On April 25, 1945, the Soviet Army advanced from the east and the American Army advanced from the west and met at the River Elbe; with only Berlin remaining for the siege and attack with fusillade. Both Americans and Russians did not know how to greet each other. One word “tovarishch” (comrade or friend) uttered by an American soldier’s slip of the tongue, broke the embarrassment.

They cheered, hugged, toasted in celebration and pledged that youths should never ever confront in war. The Elbe Day was recorded in history, but the pledge was fleeting and quickly vanished as the Cold War soon followed.

A few months prior to the Elbe Day, the city of Dresden, known as Florence of the Elbe, 100 km upstream, had fallen into utter ruin engulfed in an inferno from the Allied force’s heaviest air raids that lasted for two days. There was fire everywhere and everything was on fire! Hot winds from the firestorm killed people as they fled into underground bomb shelters. It is not clear how many perished because the population had not been recorded. An estimated 25,000 to 200,000 people lost their lives.

Amongst the survivors, there was a POW American witness, Kurt Vonnegut (1922-2007). He was detained underground in the now well known “Slaughterhouse Five” that withstood the heat. American POWs, including Kurt, were mobilized for mass burial.

“Our leaders had carte blanche as to what they might not destroy. Their mission was to win the war as quickly as possible, and while they were admirably trained to do just that, their decision as to the fate of certain priceless World heirlooms - in one case Dresden - were not always judicious. When, late in the war, with the Wehrmacht breaking up on all fronts, our planes were sent to destroy this last major city.

I doubt if the question was asked, ‘How will this tragedy benefit us, and how will this benefit compare with the ill-effect in the long run?’ Dresden, a beautiful city, built in the art spirit, symbol of an admirable heritage, so anti-Nazi that Hitler visited it but twice during his whole reign, (and food and a hospital center so bitterly needed) but the city was plowed under and salt strewn in the furrows.”

Kurt wrote this in his Armageddon in Retrospect in 2008, a posthumous book. I have followed him as one of my favorite contemporary writers, and because my first German friend, a young Bosch engineer I befriended, had the same name Kurt. I almost cried when he added “I stand convinced that the brand of justice in which we dealt a wholesale bombing of a civilian population, was blasphemous,” also referring to Hiroshima and Nagasaki.

As to the Russians who discovered that Kurt was an American, he wrote that they embraced Americans, congratulated them on the complete desolation of Dresden, Americans accepted it with good grace and modesty. However, Kurt wrote that he felt he would have given his life to save Dresden. Well said, Kurt!

In 2005, I traveled from Berlin to Prague by express train. Dresden was the first stop. I hurriedly took a picture of the station. The train crossed the Elbe and I saw the city recovering with great effort and sacrifice. Sheer consolation! The city Meissen, nearby, across the Elbe had escaped the bombing. Meissen is the home of the world famous white porcelain manufacturing.

As I approached the German-Czech border along the Elbe, my eyes were fixed on the breathtaking riverside sceneries. The spectacular hills running along across the meandering Elbe River was so awesome and beckoning, I forgot to take photos.

I noted one of the station names: “Bad Shandau.” Later a Google search found that Bad Shandau (bad is spa in German) was the location for the Romantic Saxon Switzerland National Park Center. It is surrounded by the Elbe sandstone highlands, reportedly the source of the Dresden cathedrals and maybe the Meissen porcelain.

Pardubice is a medium-sized Czech town where I spent about a week, with the help of my friend George (introduced in Riosloggers as the silver iron man). The Elbe River comes down from Hradec Kralove (Queen's Town) and runs through Pardubice. Entering the city of Pardubice, a smaller river Chrudimka flows into the streams of the Elbe. I remember seeing a sightseeing boat. I would like to return to the Elbe River someday and visit Saxon Switzerland and Bohemian Switzerland. 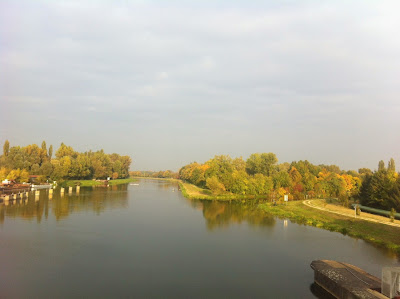 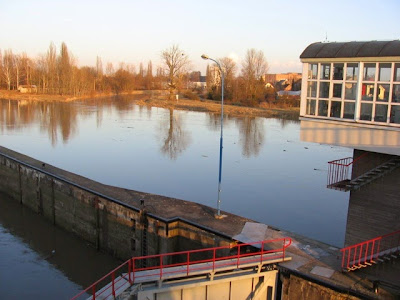 Top photo courtesy of DTM Valerie Wagnerova who is currently VP of Public Realtions for the "Pardubice Enthusiasts" Toastmasters Club.

Posted by riodan at 7:51 AM No comments: