"Stand if you can crawl
Walk if you can stand"
Even thus harshly reared/trained at tender age
His love grew to glimpse 'Mom', after life-separation 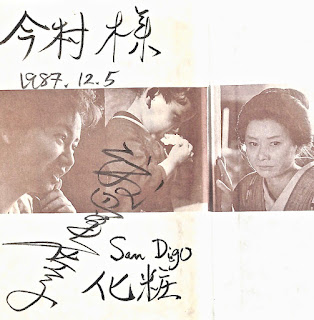 Komatsuza, a theatrical troupe specializing in works by playwright Hisashi Inoue, is putting on a series of his plays this year in a project called 'Memorial 10', celebrating his life works. Among them I found Inoue's signature play "Kesho" or "Make-up", a one woman show, once successfully acted by Misako Watanabe. Originally it started as a single act of 45 minutes. Then a second act of equal length was added by the witty playwright, inducing Misako to confess, "can I endure a 90-minute ordeal?"

I represented my employer in helping Misako Watanabe find theaters for her performances in Southern California in 1987. The request came a few months before her arrival, but I found it a terribly difficult task to find an open local theater where shows are usually booked a year or more in advance. On my first try, I could not find any San Diego theater available. I used friendly cultural connections to see if rigid rules could be bent. I had to meet theatrical managers or representatives in person. The language barrier was an issue as well. Throughout the play, Misako speaks close to 30,000 words in crude Japanese dialect quite rapidly. Even with English caption being shown, it was a challenge. Misako wanted to see the theater beforehand.

She was traveling with Chijinkai Troupe headed by Producer Koichi Kimura. At last, I was able to secure two theaters. One was the then Gas Lamp Theater, now reborn as the modern Lyceum at Horton Plaza. The Gas Lamp was an old, small theater with 100 seats. The other was the Carlsbad City Community Theater that had a few hundred seats. I believe she performed two nights in Carlsbad.

I read she fondly reminisced at her retirement of her cumulative 648 life performances, including those in France, Canada and US. While in Carlsbad, I took her to San Juan Capistrano for my favorite apple pie and coffee shop I used to frequent during my LAX-SD commute. I was glad she seemed so refreshed herself and enjoyed our casual drive together.

The play by Komatsuza is named Kesho and has two acts. However, there is a BIG change. Act One is performed by a female proprietor and Act 2 by a male proprietor. Good news was that Kesho was playing this weekend in Koga City, Fukuoka, just an hour away from Kitakyushu. The bad news was the tickets were all sold out.

P.S. - I recently found a book on my bookshelf – Misako Watanabe's book, "My Solo Trip, One Woman's Show". She autographed it for me as a memento of her San Diego stay. I saw that her book won the best essay prize in 1987 presented by the Japan Essayist Club. 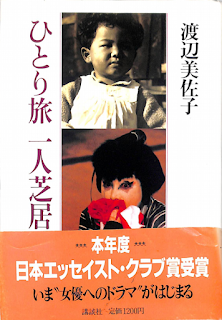 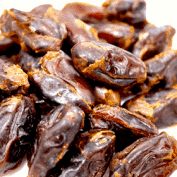 My old Toastmaster friend Mr. Y called me earlier this month to remind me to attend his speech night on Father's Day weekend. He sounded elated. You'll be treated with the palm dates from my Chad friend, along with my palm date speech, he said.

He had a number of North African friends in connection with his IGES activities. I spiffed myself up with a hair-cut, put on my Father's Day gift – a persimmon colored flower-print shirt which came from my daughter in the U.S. Because I had a couple of errands to run that took a while, I was a bit late in arriving. I found the meeting room full. Usually the attendees number less than 20 with all our members attending. I saw close to 30 people there. Wow! The newspaper membership advertisement worked!

It was a night we call "Speech-a-(Mara)thon." I looked around. Mr. Y was not in. Panicked, I found his speech evaluator sitting close by. I sent her a message asking "Mr. Y"? The answer came back "he is absent tonight because of his sudden illness."

Then I noticed paper plates with palm dates on the table. Oh, my! Those are the dates he had talked about when he called me. I could not resist to beg for my 3-minute talk about the dates at the end of the Speak-marathon to thank him for the palm treats.

This was my speech:

"In place of Mr. Y, the would-be speaker #8 tonight, this is what I know about dates on the paper plates. Dates are called 'Arbor Vitae', fruits of life per the Quran, Prophet Muhammad. The palm grows in Arab countries, in the dry countries and desert under severe weather. The palm date, has served humans for a thousand years or more, and contains not only ample nutrition but minerals necessary for humans, such as iron, calcium, potassium, and phosphorus – a lot more than those found in vegetables. They should be indispensable to a woman's beauty. I know that the dates in the front were from his Chad friend for Father's Day. Let's pray for his early recovery and enjoy and thank him and his Chad friend for the delicious and nutritious treats.

And, for all the father's here tonight - , Happy Father's Day!”

Posted by riodan at 9:34 AM No comments: 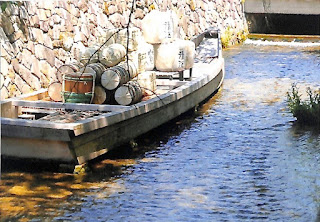 The May reunion of the Old Boys Japanese expats group who I befriended in San Diego CA took place in the heart of downtown Kyoto, Kiya-cho aka Pontocho. A bit early going outdoors, the Ganko-Zushi Nijoen banquet is set in the open-air deck facing Kamo River. The venue was once owned by Ryoi Suminokura (1554-1614, surname meaning "Corner Warehouse"), one of the Kyoto’s wealthy merchants, whom I introduced in my blog about 10 years ago along with the Takasegawa Canal he built and flat Takasebune boats. These boats are long gone, but reportedly hundreds of boats sailed up and down the ten kilometesr canal in the heyday between Fushimi and Kyoto. Ryoi built his Kyoto home at this diversion point of the Takase River from Kamo River. 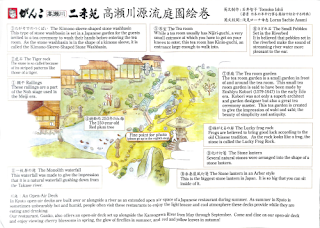 The name Suminokura fascinated me as a forerunner of Kyoto business enterprises. The family earned their fortune from the so-called Nanban trade by the Shogunate authorized vessels. Suminokuras left registration at the Shogunate office, with a dozen applications as well as authorizations for their voyages from Nagasaki to Vinh, Vietnam. There was one shipwreck disaster incident and records showed Ryoi visited Nagasaki to comfort survivors of the shipwrecked boat. Takasegawa project seemed to be one of his smaller enterprises. Easing rapid Hotsu River to a transportable river for Tanba and Kyoto was another. With the help of his son named Soan, rivers in Kanto area, such as Oi, Tenryu were also candidates to tame, but he passed away before it was feasible. Ryoan's name is remembered as well in connection with Lake Biwa Channelling or Kyoto Channelling. 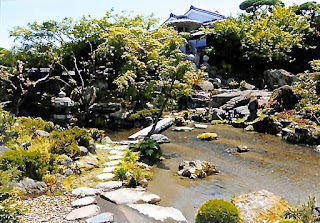 Upon our arrival at the Ganko-Zushi, we were lead to the venue deck through the magnificent Nijoen Japanese garden (see the map), as we admired a monolith waterfall, a small tea room garden made by a legendary tea master Enshu Kobori (1579-1647), huge stone lanterns (the biggest in Japan) in an Arbor style with a 250-year-old red plum tree. The site had more gardens, but was moved to the nearby Nijo Castle by Kyoto City.

We had nice sunny weather in Kyoto at the reunion, and all enjoyed the Ganko-Zushi outdoor banquet. Our coterie Grandfather Mr. Arthur Jonishi was there, received hearty greetings from all. We missed Mr. Iue greatly this year. Mrs. Kuwahara, the first Minato Gakuen principal was represented by her daughter Kasumi and her husband Norikazu. I reported Minato Gakuen celebrated 40th year anniversary in San Diego. At the end of 2018 there were 524 students enrolled at Minato Gakuen, including 38 in kindergarten, 18 in senior high, and the remainder were elementary and junior high students.

This Ganko-Zushi Nijoen Restaurant is facing Shimadzu Foundation Memorial Hall, built in 1975 to celebrate its 100th year anniversary at its original birthplace. Taking this great opportunity, I visited the Museum, arriving an hour earlier before the reunion. I had a very instructive tour. Dr. Koichi Tanaka of Shimadzu won the Nobel Prize in 2002. I read his biography in English, which seemed to impress those present. Here is Nobel Laureate Dr.Tanaka's autobiography site.

I wish to thank both Coterie Kanji Nishimura and Kawamura who chose Ganko-Zushi. 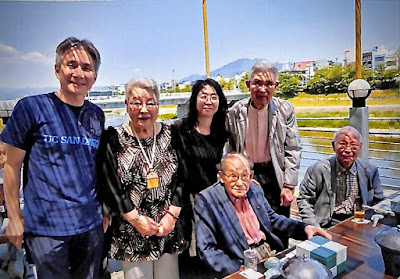