On his trip to the Deep North of Japan in summer of 1689, Haiku Master Basho (1644-1694) visited Tendai sect Temple “Risshakuji” in Yamagata and sang a  landmark verse:

Ah, such stillness
Cicadas cries
Piercing into the rocks Could Basho ever imagine his Haiku would incite fierce arguments 300 years later among the literary critics as to which kind of cicada Basho heard?  It was kicked off by Mokichi Saito, the famous poet as well as psychiatrist, who broached that Basho at that site heard the “abura-zemi”(Graptopsaltria nigrofuscata). Toyotaka Komiya, who lived then in Sendai close to Yamagata, strongly opposed it.  Komiya said it couldn’t be the Abura-zemi. It should be “ni-ni-zemi”(Platypleura kaempferi).  Mokichi, reportedly a bad loser (per his son Morio Kita, who followed in his father’s footsteps and was an equally famous writer having won the Akutagawa Prize) challenged Komiya, trying to substantiate his claims. He went back a couple of times in different years but didn’t get the desired answer, due to rain and other causes. After a few attempts, Mokichi himself seemed to have conceded his view at last. Scientists also made similar tries, in vain, after 2000, with the help of Basho’s well kept diary and Haiku, suggesting another kind of cicada, the “higurashi” (Tanna japonensis) adding to the confusion. The dispute is still raging on.

Kevin Short, the Daily Yomiuri columnist “Nature in Short”, whom I admire,  wrote that Japan is a cicada paradise and there are five common species in the lowlands of Japan. The three species above referred to in the Basho controversy are all included.

Today we expect the weather bureau’s declaration of the end of rainy season any moment and the hot summer is due with the arrival of the cicada season in Fukuoka, Kyushu where we live. 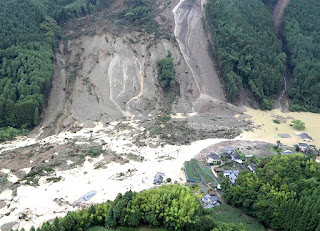 Recently, we Fukuokans suffered from the historical torrential rain down south in the mountain valley zones, like Asakura City (Akatani River basin - see Youtube video below), Toho Village and neighboring Hita City (Oita Pref) side-lining people from west to east, causing hundreds of mountain landslides and flooded homes and fields.  The death toll went up to over 30. A real tragic devastation and utter grief beyond description.

Thousands of army forces mobilized immediately to search for the missing using helicopters.

Once the rescue army forces left the flooded sites, volunteers in the thousands arrived daily to help home owners and farmers remove mud, driftwood and debris.

Awful amounts of wood were gouged out from the mountains and it’s probable cicada larvae most likely met with unfortunate disaster. However, I’m sure grief stricken villagers still hear cicadas, same as previous years and may soothe and encourage the survivors that life goes on.

I have a Japanese friend who usually spends his summers in Cameron Highland, Malaysia, 1800 m above sea level. Cameron Highland was discovered late in the 18th Century by an early British colonial and the area was developed as a tea plantation.  It is 200 km north of the capital Kuala Lumpur and 90 km from Ipoh.

Jim Thompson (1906-1967), Thai silk king, had his cottage there, and it’s a mystery how/why he went missing during his stay.  A friend told me Cameron Highland is a mecca for insect hunting, cicadas in particular. It is famous for the world largest cicada, “Tacua speciosa” aka Emperor Cicada!   I found a photo.  The Emperor Cicada covers almost from your elbow to the heel of your hand. Fantastic. What do they sound like?  The sound of a trumpet! Can you believe that?