Christian Samurai: A Piece of Japan's History on Christianity

Ukon, stared at his own death, in a mortal combat with swords.
So dark to discern friends or foes. He felt he won the battle but was
struck down unconscious. He was saved miraculously and told the blow was
his friend’s. Ukon was touched as an act of God to punish him yet He
saved him. (the moment Ukon turned to real Justo)

“Anybody who holds swords will be ruined by swords.” by Justo Takayama

In 2003, the Japanese bishops' conference submitted a lengthy application for the beatification of Ukon Takayama (1552-1615), who was dubbed as Christian Samurai. When and after Tokugawa Shogunate banned Christianity, Ukon refused to disavow his faith, even losing his de facto status as a feudal lord. Eventually he was expelled from Japan and died in Manila, Philippines. His baptismal name was Justo.

Ukon set up a semenario in Takatsuki and baptized thousands people each year until he was transferred to Akashi from Takatsuki by Taiko Hideyoshi. ‘Settsu’ Takatsuki, where Ukon’s castle was, is about midpoint between Kyoto and Osaka and an important strategic location during the Age of War Lords.

I spent my early 20s here in Takatsuki. It was during the early 1950s. The school inherited the campus and old wooden buildings of the Imperial Japan’s artillery regiment. I revisited there in the mid 1990s to find the campus had been replaced with Takatsuki City ‘Castle-site Park’ where the statue of Ukon was erected.

Born into a family of local baron, Ukon converted to Christianity at the age of 12 after encountering some Jesuit missionaries, following in the footsteps of his father ‘Dario’. The Gospel message reached Japan thanks to a Jesuit, Francis Xavier, in 1549, which spread quickly. Perhaps Samurai needed a mental cure, similar to Zen or tea culture to dispel fears and unrest, amidst the rampant fierce rivalry among the local War Lords. The friend today may become the enemy of tomorrow. When Taiko Hideyoshi rose to power, his advisors encouraged him to ban the practice of the Christian faith. All the great feudal lords agreed, except Ukon.

Because of his stance, he lost his property, his position, his social status, his honor and respectability. He essentially became a vagabond and was forced into exile. He and his family, and a few followers sought refuge from Shodo Island to Southern Kyushu but to no avail. They were sent to Kanazawa as semi-captives under the care of Lord Toshiie Maeda. Ukon reportedly participated in the Kanto expedition on behalf of Maeda Clans. Finally, as warning to other Christian Samurais, Shogun Ieyasu arrested him, together with the missionaries, and sent him down to Nagasaki. 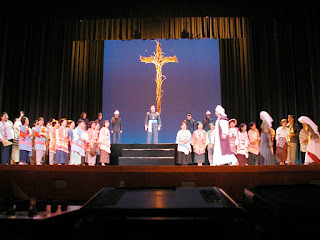 During the treacherous typhoon season, Justo was forced to sail on the overage vessel to Manila, along with 300 other Christians. What awaited them in Manila was an unexpected gun salute and welcome greetings by the delegate of Juan de Silva, the Spanish Governor of the Philippines. They were taken to his Official Residence for a reception. Jesuits there arranged quarters for them. Justo finally found a place to live a peaceful life, but fell ill and died 40 days after his arrival. "Ukon in Manila, the Blessed Lord", was performed in a joint Japan/Philippines Opera in 2003. It is based on work of Japanese writer Otohiko Kagawa. Here’s the website for details. The opera went around Tokyo, Kanazawa, Takatsuki, Okinawa and Osaka as well as Manila, Cebu, and other cities in the Philippines.

Posted by riodan at 9:57 AM No comments: 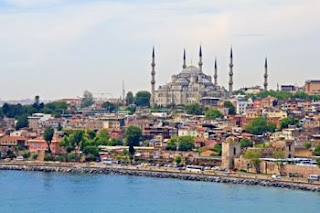 A few decades ago, the Foreign Ministry of Japan conducted national exams for university students completing their junior year and aspiring to pursue a career in foreign diplomatic services. Four of my classmates passed the exams and bid us farewell as we applauded them with our admiration and envy. About the time we graduated, we learned two were sent to the middle-east, one to Brazil, one to the U.S. Soon news came that Mr. K was killed in an automobile accident in Turkey. Legend has it, the Turkish hit song “Usuku dara” sung by Eri Chiemi in Japanese was translated by K. RIP, K!

The world today keeps a vigilant watch on Syrian truce plans left unresolved. I am glad to see that the agreement reached this week by the U.S. and Russia may put an end to the many years of bloodshed and violence inside Syria.

Turkey, the crossroads since well before the ancient Crusaders between Europe and Asia, has seen quite the flow of history. The latest number of Syrian refugees going to neighboring Turkey since 2011 has surpassed 2 million. Majority of them moved on to EU, either via land or by sea, but Turkey accepted quite a few with its “Misafire” (literally meaning guest) hospitable policy, putting up shelter camps along the Syrian border. The so-called Turkish AFAD (the Disaster & Emergency Management Authority) Cards entitle refugee children with free health care and education. I was very impressed as I read UNHCR’s humanitarian reports. 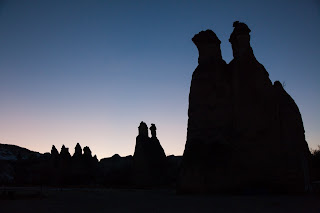 I received a surprise 2016 New Years greetings from my Taiwanese friend who is an avid photographer. She wrote that she just returned from Turkey after a two week stay, where it was pretty cold, but luckily she saw little rain during the normally wet December. Isn’t Turkey a hot spot at the moment? I asked her if she had faced any signs of danger. She answered ‘No,’ but shortly after she returned, a suicide bomber attack killed 13 at Istanbul’s Sultan Ahmet Square near the Blue Mosque on January 12, 2016.

As usual, she sent me a well-sorted photo album (totaling almost 1000 photos). The cities in her itinerary and visiting order were as follows:

With her permission, I am happy to give you access to her two albums. 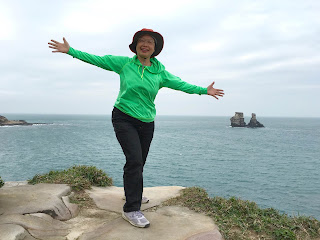 Her name is 李繼瑛 (I call her Virginia) who lives in Taipei. She has quite a photo collection of Taiwan’s natural beauty as she traveled around the entire country. My favorite is her Yangmingshan National Park's album. I know she also traveled to mainland China, sometimes far out to Gansu and Xinjiang, Tarim and Junggar Basins bordering Kazakhstan and Kirgiztan.

She writes: "I love to see the world by traveling and capturing sights through my lenses. Being there, seeing with my own eyes, smelling the fragrance, and hearing the sound is the driving force that keeps me moving forward. I am passionate about foreign languages and cultures, for they not only widen my horizons but also keep me humble and calm.”

When she is not traveling, she says she is a music teacher for parent-baby (toddler) classes with 16 years of experience. Remarkable! I learned much from her travels. Enjoy!

Posted by riodan at 7:40 AM No comments: