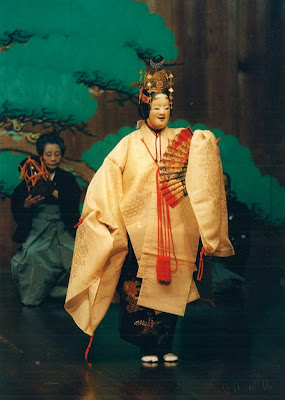 "Sakura" season is galloping here within a month!  Outside it’s still very cold, but we feel the air to be a bit milder, the trees awakening from dormancy and starting to breathe and vibrate. Forecasters say the blossoming peak will be around March 20 for southern Kyushu and around March 30 for northern Kyushu for the Somei-Yoshino species, the most popular cultured cherry trees. The name Yoshino derives from Mt. Yoshino in Nara Prefecture where mountaineering ascetic monks lead their secluded life, including the famous Samurai Rev. Saigyo whose poem read:

Mt. Yoshino, well-known for its thousands of cherry trees, must be the best venue for viewing in Japan, crowned with the 2004 UNESCO certification. (See the "Sacred Sites and Pilgrimage Routes in the Kii Moutain Range")

However, Somei-Yoshino is a minority in Yoshino; majority of them there is the wild mountain cherry tree, planted at different altitude zones. In order, starting from the foot of the mountain to the top they are; Shita-Senbon, Naka-Senbon, Kami-Senbon and Oku-Senbon, which denote thousands of cherry trees at ground level, in the slopes half-way up and the top and deep within the mountain. Yoshino visitors can enjoy flowers probably for over a month as the blossoming shifts upward gradually from the ground level.

I remembered Tomoko Iwasaki, my neighbor and friend in Hino, who performed Noh-play “Yoshino-Tennin”, about 15 years ago. I was one of the invitees to her dance and I met her husband (deceased now) who joined as a senior executive with a newly formed IT venture where my ex-employer is closely connected. I’m glad I found her photo to introduce her as the Noh "Shite" player, a.k.a. Yoshino Tennin, an angel. Look at how noble and divine looking a dancer she was!

Yoshino-Tennin is a two act play in which a man from Kyoto travels to Mt. Yoshino to see the cherry blossoms. There he encounters a beautiful young girl who claimed she, too, came to see flowers from the nearby village. The two enjoy viewing flowers together until the man questions more about her. She confessed she was a Tennin, a celestial being, and if he could wait there until evening she would return to perform the ancient imperial court harvest celebration dance.

In the Second Act, with the moon in the east and the sweet and enchanting music filling the air, Tennin appears in her true celestial form, and dances gracefully using a fan in praise of cherry blossoms, gradually fading away into the twilight mist upon a cloud of cherry blossoms.

Yoshino-Tennin Mrs. Iwasaki played on the day was the Second Act only, thus called Han-Noh (half of the Noh), omitting the First Act. The event was the 25th Year Anniversary of the club she belonged to. I saw the event program had a number of Noh 'lyrics play' without music accompaniment before and after the Yoshino-Tennin. In other words, Yoshino-Tennin was the featured Noh of the day, accompanied by four musicians, a full music ensemble (flute, and three drums - stick, hip, shoulder), and Tomoko was the star of the celebration.

Personally, my voice is low. It's bass. Yoshino-Tennin was a hard one to sing when I was a young Noh student. During a one-on-one lesson, I simply couldn't imitate my male teachers' feminine voice. The teacher suggested "just relax and try to tone softer" but I think I failed in Noh.

The lyrics of Yoshino Tennin closes with: 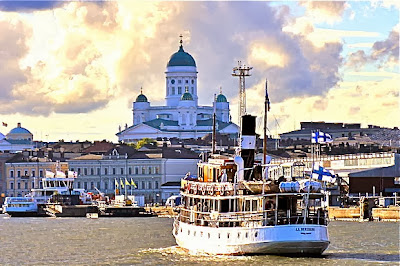 During the summer of 2000, I took FinnAir for the first time in order to attend the "Next 30 Years Towards Senior Society – a Japanese Nordic Conference“ held in Helsinki, wherein the challenging and compelling topics of aging were discussed - growing healthcare and pension expenditures, tax burdens, etc. The program included visits to senior and healthy active living community centers.

The non-stop FinnAir directly connects Narita with Helsinki. After taking off in Narita, I think I saw the Siberian coast that faces the Sea of Okhotsk. It was a very enjoyable flight; no different from flying across the between L.A. and Narita. The flight hours are about the same, 11 - 12 hours. At the beginning of the 20th century, the Russian Baltic Fleet took six months to sail from the Gulf of Finland to the Japan Sea. Look how far we have come in 100 years!

What do you associate with Finland? Sauna bath? Yes, Finland has a fine sauna culture. Karevara? Yes, an oral and tradition-oriented epic. Yumin? Yes, it's a lovable cartoon creature. Jean Sibelius? Yes, Finlandia! How about Linus Torvalds? No? He is the creator of the Linux kernel, the would-be Bill Gates of Finland, if he had continued on with his business ventures.

Anything else? Well, I have news that's a big surprise. Just about the time I was visiting, Finland was cited No. l in the world for their business environment. Oxford University's Global Competitiveness Report listed the top five countries as follows; 1) Finland, 2) U.S., 3) Germany, 4) the Netherlands, 5) Switzerland. And where is Japan on this list? Japan is No. 14!

Why Finland? The index factors reflect not only Government policies, but also the quality of the infrastructure and the skills of Finnish industries. Are there internationally known industries in Finland? Yes! This small North European Nation is home to Nokia, which scores highly for efficient innovation. I saw the Nokia headquarters building close to the highway and its complex extensions under construction on my way to visit Hvittrask in Kirkkonummi, 30 km or 20 miles west of Helsinki. 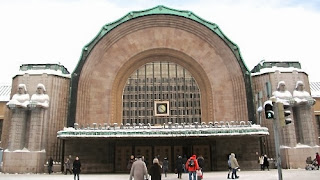 Hvittrask (H is silent), meaning 'white lake' in Swedish, is a lakeside villa and a summer studio of three eminent Finnish architects, Eriel Saarinen (1873-1950), Armas Lindgren (1874-1929) and Herman Gessellius (1874-1916) , all from Helsinki University. Nationally romantic style homes were made of logs and natural stone. Here Eriel's designs of the National Museum of Finland and the Helsinki Railway Station were completed according to the Master Plan of Helsinki City (never realized due to cost). Eriel later moved to the U.S. where he was employed as a professor at the University of Michigan and his son Eero became famous for his Arch design of St. Louis, Missouri. This visit to Hvittrask was the best thing I did during my week's stay. I walked to Eriel's gravesite in the woods. It was so pretty and I felt like I was in Lake Tahoe. Please view the following video for a taste.

Before leaving Helsinki, I had the pleasure of inviting Mr. & Mrs. Kimanen to a Russian dinner through an arrangement made in advance by email. They are great musicians well known to Kitakyushu citizens as the founders of the Kuhmo Chamber Music Festival. They brought the Festival regularly to Kitakyushu where I live. Mrs. Kimanen, a.k.a. Yoshiko Arai, is Japanese who was born in Kitakyushu. Both are regular members of the Jean Sibelius Quartet, Seppo playing cello and Yoshiko the violin. They gave me a CD of their own performance of Mozart as a souvenir. Overall, this journey was an unforgettable experience.

Mt. Fuji in full sight
and verdant air over mulberry capital
once crossing the Asakawa River
- by Rev. Saigyo, Samurai priest and poet (1118-1190) 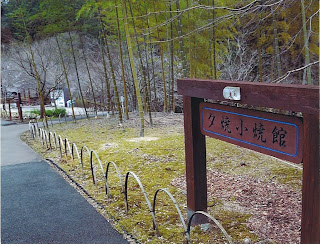 "Hachioji", meaning "eight princes*", is a commuter city of over half a million people, the majority of them working in the greater urban Tokyo area. It is located 40 km west of Tokyo. I had quite a few friends in Hachioji, when I was living in Hino, bordering Hachioji. Haruo Toda, a good photographer, is among them. Another, the Armour family resided in Hachioji in 1960s.

A few years ago when I traveled as Kyushuan, Haruo drove me to the so-called "Yuyake-Koyake Fureai no sato" (the friendly village of Ongata), now merged with Hachioji, where Miyakichi Takei, aka Uko Nakamura (1897-1972), the poet who wrote the famous children lyrics "Yuyake-Koyake", was born. Ongata Village sits on Jinba Kaido (heading for Mt. Jinba), known as the back road of Koshu Kaido (heading for Kofu, Yamanashi). 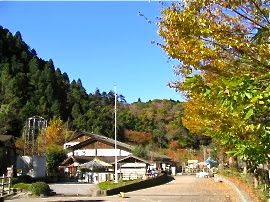 Uko was also a commuter when he started to teach at an elementary school in Nippori, Arakawa Ward in Tokyo. There was no bus like there is today between Kami-Ongata Village and Hachoijo Station, so he walked 16 km everyday one way and then took the train to Tokyo.

Uko recalled the day he wrote the lyrics. "One fine afternoon I was returning home for summer vacation, freed from school duty. The time I was approaching Ongata I saw clouds and the mountain ranges turning color, flocks of crows heading for nests on Mt. Takao, Mt. Jinba and Hachioji Castle Mountain, and then all of a sudden temple bells of local Kokeiji, Jofukuji, Shingenin rang out in chorus for curfew. The tinged sky with dusk gathering and the evening bells produced a grand spectacle, baffling all descriptions, and induced in me sadness as well."

Uko posted his lyrics in the Poem Magazine in 1919. Five years later in 1923, Shin Kusakawa (1893-1948), a music major born in Nagano (in a country-side similar to Uko), wrote music to Uko's lyrics, using quarter note patterns. His simple repeating melody makes the song pleasurable to the ear.

I remember a visiting foreigner said to me, "After some time living in Japan I realized everyday at 5PM in many places you could hear a 30 second catchy chime melody "Yuyake Koyake". You can usually hear it near schools and city hall over powerful speakers and if you are walking around Tokyo at 5PM, you will most likely hear it." Yes, I had the same experience, but have almost forgotten it.

Now I have quoted the Rev. Saigyo poem above. Perhaps Rev. Saigyo was heading west either from Kamakura, or on his way back from Hiraizumi, Iwate, where the northern Fujiwara clan prospered. I was happy to find the familiar name "Asakawa River" in the 12th century. It must have been a big river then and the area Hachioji was already known as the capital of mulberries and silk production.

My old house in Hino City is close to the Asakawa River. There was a nostalgic river ferryboat and a citizen swimming pool where I used to take my children. I traced the source of Asakawa back to Hachioji and found the River Ange running through the Ongata village is another name for Asakawa. I'm excited that Ongata and Hino are connected through the Asakawa River, upstream and downstream.

I just wish to add lastly that Hino where I once lived is getting highlighted as the urban waterfront space for irrigation and greeneries as environmentally advanced city in the Greater Tokyo Blueprint.

1. Eight princes appeared in the dream of ascetic scholar monk "Myoko" as a sign of his revelation at Mt. Fukazawa where Ujiteru Hojo built his castle during the Warring Nation Period (1482-1558) and named it after eight princes. The castle was short lived, leaving the ruins of the castle.

Posted by riodan at 6:55 AM No comments: