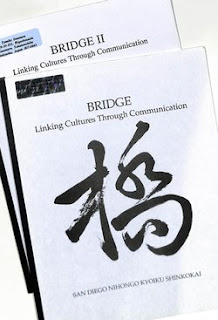 Bridge was the name of the early 1990’s official publication of the San Diego Nihongo Kyoiku Shinkokai (San Diego Association for Japanese Language Promotion), which operated “Minato Gakuen”, a Saturday Japanese School primarily for the Japanese expatriates’ children. Minato Gakuen got jump started in 1979 with less than 40 students and grew to 400 in 10 years after the school's opening. The growth necessitated a search for a larger school facility that can accommodate two dozen classrooms for use on Saturday only. I served as President of the Association when Minato celebrated the 10th Anniversary and acted as Chairman of the School Site Search Commission. I thought of publishing a booklet to reach and communicate with local American schools and was able to distribute it to schools that teach Japanese as a second language. To my surprise, there were more than a dozen American schools teaching Japanese, including La Jolla Country Day School.

As editor, I asked Haru Reischauer, living in La Jolla, to write an introduction for the very first Bridge issue, which she accepted graciously. I edited the second issue but retired from work and left San Diego in 1994 before the issue was published. I received Bridge #2 in Japan by mail. It turned out to be the last issue published since nobody succeeded me as editor. Haru Reischauer passed away in 1998, four years later. The following is her contribution in its entirety.

“As we rapidly approach the 21st Century, we are poised at the threshold of a new international world order. Because Japan and America are presently the two economic superpowers, the relations between OUR two countries will play an essential role in the peaceful development of this new order. This places great responsibilities on Americans and Japanese to strengthen our relationship. We must become more knowledgeable and more appreciative of each others’ language, because through it we cannot help but learn our culture and background. 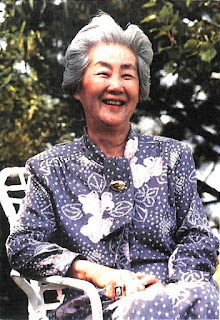 My family experiences have shown me the importance of language learning. My maternal grandfather, Rioichiro Arai, as a young boy in the early Meiji period, wanted to establish trade with America to sell Japanese silk from our family business. Soon after Japan opened its ports to foreign trade in 1860, learning English came into vogue because it was considered the ‘intellectual currency of the commercial world.’ My grandfather learned English and it enabled him to come to America in 1876, when he was twenty. With diligence and hard work, he succeeded in establishing trade between Japan and America. This trade was not only profitable for Japan’s economy, but it was also the start of the close relationship we have today between our countries.

In the early 1930s in America, just a few years before WWII, my late husband, Edwin O. Reischauer started the Japanese language program at Harvard University. The war accelerated language training for American officers as the future need for communication with the Japanese was realized. Since the war, as relations advanced at a rapid pace, Japanese studies and language courses in colleges and universities have increased throughout America. The large number of students in Japanese studies have formed a reservoir of good will toward Japan, which is the grass roots basis of the relations we have today.

Relations between San Diego and Japan, our closest Pacific neighbor, are rapidly developing. This will play an essential role in the development of the Pacific Rim. In recognition of the importance of this relationship and the urgency to build a bridge of communication across the Pacific, universities, community colleges and even city schools now have programs for the Japanese language in San Diego. The writers of the articles in this pamphlet testify to the benefits that they realized through their studies of Japanese. I am gratified to learn that the members of the Japanese Language Education and Promotion Program Society of San Diego are now endorsing and supporting the advancement of Japanese language training in this community. Let us all work together in advancing this educational opportunity in San Diego.”