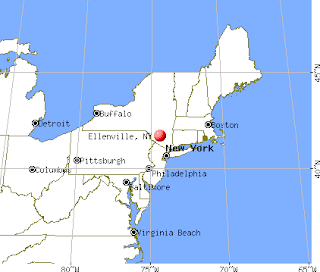 An hour’s drive north along the Hudson River from Manhattan and a left turn takes you to the foot of the Catskills, where Rip Van Winkle dozed with a rumbling sound in the distance as a lullaby. The area dishonorably nicknamed the Jewish Alps is a favorite summer resort for many New Yorkers. New England comes first when talking of autumn foliage, the Catskills were closer to us as a family coming from New York. We used to go on excursions to view foliage in upstate New York during the weekends in the 1960’s.

Triggered by the assassination of President JFK and the wide East Coast area blackout chaos, New York had an uproar of labor strikes one after the other, from garage workers to garbage collectors, under Mayor Lindsay. However, one step outside the city and the New York throughways, rustic villages and alpine air awaited you.

One day we headed for Monticello. We found a big landmark with the village name “Mataichimura” written on it in Japanese. After over 50 years, I can’t say for sure if it was a garden mark with trimmed flowers. Probably I’m beautifying my memory. Daily flower trimming must be costly. Rather, it could have been a stone or wooden landmark. I just wondered why this village had a landmark with a Japanese name on it.

A while later, a group of young Japanese golfers from electronic industries in New York set out for a weekend golf trip. I joined the group and returned to “Mataichimura”, and this time I solved the riddle from my previous outing. Sanyo, an austere name, was based there, in Ellenville, New York. Toshio Iue (1902-1969), the founder and first president wrote in his book “Anticipating the Birth of Worldwide Standard Employees” (publisher: Bungei Shunju, 1967) that Sanyo entered into a business relationship with Channel Masters, an antenna manufacturer. He foresaw the importance of joint ventures to avoid the increasing US-Japan trade frictions. It was Toshio Iue who named Ellenville “Mataichimura”, a very appropriate name in the Japanese sense. The name Mataichmura, meaning, “another village” evokes images of countless visits to many counties and many villages, one after another.

The golf course belonged to Channel Masters. It has only 9 holes, all hilly ups and downs, with no on-site starters or managers. We just went in and played the same 9 holes twice and dropped in at Sanyo inside Channel Masters as a courtesy. The group was met by Toshimi Takemoto heading Sanyo there. Sanyo people were at work even though it was a Saturday. Their telex machine room operations looked very busy and reverberated with activity. We quickly headed for Sanyo’s dorm, a 4-story house with many rooms, and the group stayed overnight by sharing rooms.

My family revisited Ellenville about a year later in the summer. I called Mr. Takemoto without advanced notice. He invited my family to his home despite the suddenness of our visit. My children were happy to play outside with Takemoto’s children. My wife and I listened to the story of Mr. and Mrs. Takemoto’s weekly trip to New York to buy Japanese food. The couple had the responsibility to feed the employees from Japan. On their return trip home from New York, their station wagon was fully loaded with Japanese food for dorm dining.

I started to work for another company in San Diego in the early 1970’s and forgot all about the East Coast and Ellenville. In the early 1980’s, E&E Sanyo arrived in San Diego and became our neighbor. Our family became close to Mr. and Mrs. A in connection with the Minato Gakuen Japanese language school, primarily for the Japanese expatriates. I remembered Takemoto and inquired about his latest assignment. I found out Takemoto was in Los Angeles and I was convinced that I would meet him again soon.

That day finally came. He was named a major speaker at the annual “Focus on Japan Festival” sponsored by San Diego State University. I listened to and recorded his speech, as he was acclaimed as the best English speaker in Sanyo by Toshio Iue. I went to congratulate him after the speech. “It has been 30 years since we visited you in Ellenville.” I felt so much emotion that no words came.

I read in the trade paper that Takemoto returned to Japan and then retired after a few years of service with Sanyo. Before I retired, I was hoping to revisit Ellenville before returning to Japan.

PS
I revisited Ellenville in 2002 after visiting my son who was working in New York. Channel Masters was out of business. I dropped by the golf course I had once played. The golf course was there, but it looked shabby compared to the gated resort community. The landmark “Mataichimura” was gone.