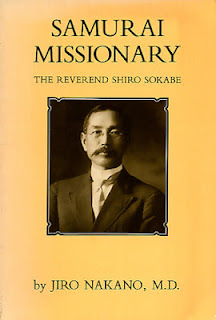 ”I tell you the truth, unless a grain of wheat falls to the ground and dies, it remains only a single seed. But if it dies, it produces many seeds."

It was close to my retirement when browsing the UCSB Library, I found the book titled Samurai Missionary published in 1985. While perusing the book, the name "Imabari" jumped out at me and caught me by surprise.

This is the city in Ehime Prefecture on Shikoku Island where I was born and raised. I never imagined Imabari as a stage for international drama for the scriptures. The book was written by Rev. Jiro Nakano, an MD and Hawaiian pastor, in memory of Rev. Shiro Sokabe (1865-1949), the Samurai Missionary himself. 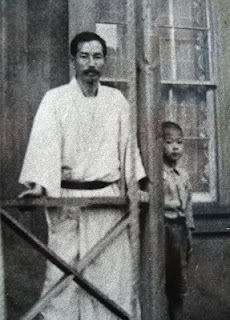 As a new Doshisha University graduate, Rev. Sokabe answered the call from the Hawaiian Board of Missions to work with struggling immigrant Japanese plantation workers and their families on the Big Island. This was not exactly a trip to paradise. He overcame poverty, prejudice and rigid social class systems to raise hundreds of plantation children, teach them about Jesus, and show them how to fit into the community. His inner strength and his countenance made him an effective communicator in the Japanese community and to plantation managers. Not only did he educate and raise hundreds of children, but he helped the immigrants make the transition to their new country of residence. His ministry here began only a few short years after Hawaii was annexed by the United States. Meanwhile, a woman named Shika Nakagawa, an acquaintance of Shiro, who had been trained as a nurse at Doshisha University, was courted, and brought over for marriage to work together with him. Shika became a mother figure for many of the children, especially the girls.

By now you are probably wondering how Imabari figures into the story. Kenjiro, aka author Roka Tokutomi (1968-1927), was a friend of Rev. Sokabe – a friendship fostered during their Imabari days in 1885. Both were disciples of Rev. Tokio Yokoi, the first pastor of the Imabari church, which was the very first church which opened in 1880 in Shikoku. Rev. Yokoi is the son of Shonan Yokoi, a scholar and political reformer of the Meiji Government, who was unfortunately assassinated in Kyoto. Kenjiro, who was just baptized in his native city of Kumamoto, wanted to work under his cousin Rev. Yokoi in Imabari.

Shiro Sokabe had been with Rev. Yokoi since 1883, as an active and devoted minister. He was popular in the church as a good singer. Nicknamed "Koya", Shiro was described as a high-cheeked boned and a peach-complexioned young man with downcast eyes. These were the distinct features of the Samurai Missionary as per the author Rev. Nakano.

The book details their youthful daily routines they took together along with another disciple Hayashi. The three of them went out preaching (neighbors called them "the three fanatics") to the area that had a thriving towel manufacturing industry as well as poor fishing villages. They often met with disappointment, going back to their commissioned off-school building upstairs room they shared to sleep. They made their beds on a big table and slept with kaya (mosquito net) over the beds. Even with three square meals a day, they had big appetites and energy, and used to pawn their belongings to buy more food, fruits - watermelons in particular, and cheap sweets. One night, they bought plenty of beef, ate it all and slept. When Kenjiro woke up in the morning, he found Shiro was missing and he didn't come back until the next day.

Shiro, upon returning, told friends that he fasted all day, spent the night in meditation and prayer, on top of Mt. Chikami. I, as an Imabarian, cannot count the number of times I climbed Mt. Chikami (244 meters) in my childhood. Now, a park today, the mountain was my backyard. That's how Shiro was nicknamed Koya. While three quarreled and grappled, their friendship grew and Kenjiro gave advice and even pawned his silk Kimono for Shiro to travel to Kumamoto to join the Oe Gijuku (School) built by Soho Tokutomi, Kenjiro's brother. Via Matsuyama, Shiro walked all the way to Sata Point, crossed the Inland Sea by fisherman's boat to Kyushu and walked again to Kumamoto.

Thus, reading such detailed descriptions of Imabari in the Samurai Missionary, I suspected the author Rev. Nakano may have been influenced by the work of novelist Kenjiro Tokutomi, who left many tales of his youth, such as "My Memoirs", "Shadow of Death", "Fuji" (the incomplete posthumous work) etc. because Rev. Shiro Sokabe wanted everything he had written destroyed upon his death. He was a man of integrity who desired no fame.

During the past 10 years, I searched in vain for Kenjiro Tokutomi's writing where he might have mentioned Shiro Sokabe. When I did a search on his name on the Internet upon my return to Japan, all that came up was: "Shiro Sokabe, born in Fukuoka Prefecture, descendent of Sokabe clans in Tosa Province".

A few weeks ago, I Googled Shiro Sokabe and found his digitized book online in the National Diet Library in 2002, since his copyright expired. The book title was $3000 Short! I was finally able to discover Kenjiro Tokutomi's preface, which was his "Imabari Memoir" I had been looking for. $3000 Short! was written in 1926 by Rev. Shiro Sokabe to raise funds to build a new church and school called Honomu Gijuku (after Oe Gijuku in Kumamoto) in Hawaii, in memory of the past Shika Sokabe. He wrote in the book that $6000 had been raised but the project required $3000 more. Apparently Rev. Sokabe sent a letter to ask Kenjiro Tokutomi for financial assistance. Inasmuch as Kenjiro wished to help his lifelong friend (he had not seen Shiro for 30 or more years), he was not in a position to pawn all his belonging as he did in his younger days.

He saluted, however, the Sokabe couple’s lifework to help and educate 1500 Japanese American children in Hawaii and thanked Honomu Gijuku for modeling themselves after Oe-Gijuku. Kenjiro wrote about all the episodes that took place in Imabari. Rev. Nakano quoted Kenjiro’s reply in an English translation in his book Samurai Missionary. $3000 Short! is roughly 100 pages long, consisting mainly of Rev. Sokabe's sermons, including "Addressing all the youths, boys and girls, born in Hawaii" (Chapter 1). The book, written in Japanese, was originally printed in Tokyo. 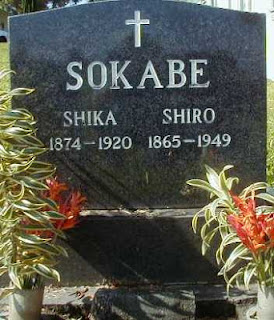 Hilo Coast United Church of Christ is the name given to Sokabe's chapel. Headstones of most Japanese Americans at the Melany Cemetery nearby face Mauna Kea, but Shika and Shiro Sokabe's headstone face the Pacific Ocean (see photo). Honomu's current population is 600 as of 2007, of which Japanese Americans make up approximately 100, less than 20%. The scholarship foundation started by Sokabe's good will is still going strong. Some of the Nisei children disciplined by Rev. Sokabe went on to enlist and fight in the 442nd Battalion.

The homepage of Hilo Coast United Church of Christ shows in its heritage page l) Imabari Church where Rev. Sokabe was baptized; and 2) Doshisha University Church, known as the first church in Japan funded by American money, where the reverend was educated.

Posted by riodan at 3:53 PM No comments: