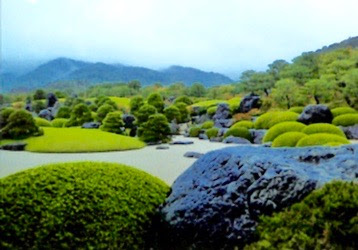 “Glory to your home! Glory to your home!”  So sung Byron Louis Cage, an American singer.  This is my tribute to Zenko Adachi (1899-1990), who built the Gardens of the Adachi Museum of Art in Yasugi City, Shimane Prefecture.  He was born exactly where the museum sits – not with a silver spoon in his mouth however.  He likened his boyhood to male “Oshin”, a country girl sent off to work as a babysitter to support her family at age 7.  The Oshin TV movie, though fiction, held sway over the minds of not only the Japanese but all Asian minds around the early 1980s.  Zenko wrote in his autobiography that he tackled all kinds of jobs – carter, coal/charcoal retailer, shellfish dealer, street trader, rice broker, etc. He was discharged at age 20 from the military service with a superior private ranking.  His stint in the military opened his eyes to the world and gave him strength and confidence.

He traveled to Osaka. After working for a coal/charcoal wholesaler,  he started his own firm in good earnest. Adachi returned to Yasugi  for marriage and opened his firm in charcoal venturing, the beginning  of the Adachi Conglomerate. He had extremes of fortune, ups and downs, frequent changes of commodities, from grains and textiles to hardware  and swords manufacturing.  He worked at many different side jobs such as automobiles, real estate, financing, all which helped to produce synergism.

While developing his taste for arts, he started to purchase Master Taikan Yokoyama’s (1868-1958) artwork to which he was personally attracted.  I believe he bought them as an alternative to mortgage and insurance, as they were actually sold whenever necessary.  But the accumulation of artwork, his treasure trove, should have encouraged his ambitions not only to create an art museum but also the museum garden. 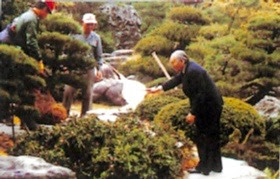 It was in 1968 that he submitted to Yasugi City Office his building permit to erect the Adachi Museum, and in 1970, the museum had its opening ceremony for the public.  To date, the Adachi Museum has existed for 46 years, almost half a century.  I myself left for the U.S. in 1973 and returned in 1994 and was not aware of  the museum.  In 2003, the Journal of Japanese Gardening, a  magazine on Japanese Gardens in the U.S., ranked Adachi No. l  and I was surprised.  Adachi Museum has kept its dominance  since then.

I planned to visit Adachi for a long time but did not make it  until this summer. For one reason, it took me a while to find where it is located.  JR Yasugi Station (famous for Yasugi folk song of  loach scooping with a bamboo basket) is the closest station where I waited for the first courtesy shuttle bus in the morning. The bus was packed.  I asked the driver how far he was driving. His answer was 15 km. To the west on the San-in Road toward Matsue and south along the River Iinashi, merging with Hii-River (supposedly the raging river personified  as an 8-headed, 8-tailed serpent tamed by God Susanoo per the Kojiki, the Legendary History of the old Japan).

At Furukawa-cho, about 20 big luxury buses were ahead of us offloading passengers. They were all Chinese visitors, showing their passports at the ticket counter.  I checked in my knapsack while waiting then followed the hordes of Chinese tourists. Adachi was reported to be concerned about the annual visitor declining down to 10,000 visitors after the initial visitor rush.  Were he still alive, he would have been all smiles to see a huge number of Chinese tourists. It started raining but luckily visitors observed each garden gallery  through wide screen glass windows. 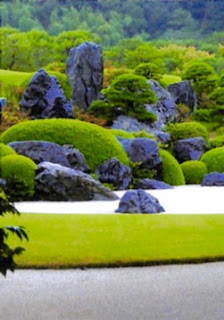 Each garden gallery observed what Mr. Adachi advocated  as “Japanese Garden be like a Living Painting”.  The garden is huge - 200,000 square meters (50 acres) has hills, pagodas,  cliff and falls.  The garden has 1000 pines – 800 red pines and 200 black pines. The red pines are from Noto Peninsula.  At one time after the garden opened, Adachi had a company trip to Noto.  From the railroad train window he saw pines of great posture and abruptly got off at the next station to search the pine forest he saw.

Authentic stones used for the dry gardens are from Totteri Sajigawa Stones, and Osakabe River stones, on the border of Tottori and Okayama.

It seems Adachi lived inside the museum upon completion until his death 20 years later. The original landscape was designed by Kinsaku Nakane, President of Osaka University of Art.  The landscaping is indeed spectacular - acres of meticulously arranged rocks, moss, trees, and sand set against an unspoiled mountain backdrop, and for good measure, a waterfall in the distance.

Adachi Art Museum now enjoys its honorific title as Taikan Yokoyama Art Museum because of its awesome possessions of Taikan’s  master artwork. Visitors should be thrilled to spot so many Taikan’s Mt. Fuji, Sunrise in the Ocean, a timeless child clad in rags called “innocence”, and may wonder why such Taikan’s exhibits were made possible.  Zenko’s personal attachments came to fruition. Here’s to the long cherished zeal and obsession of Zenko Adachi which has finally found the moment of his life endeavors.  “Glory to your home! Glory to your home!” 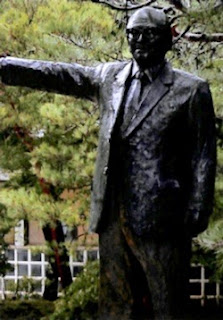 Posted by riodan at 2:58 AM No comments: