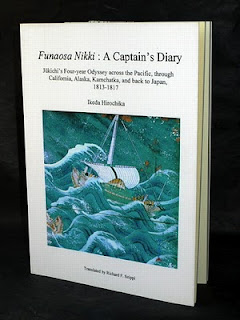 "Beachcombers found an exotic coconut seed
from an unknown South Sea Island
I wonder how far it has traveled and how long been adrift?"
- From a poem sung by Toson Shimazaki (1872-1943)

We were taught at school that the tropical coconuts traveled on the black current (Kuroshio) drifting up north towards Formosa and Japan. Smithsonian Magazine reported on an experiment conducted by the girls of the Natural Science Club in Choshi, Japan. They threw 750 bottles into the Kuroshio in October 1984 and 1985. By 1998, beachcombers had recovered 49 of them - 7 along North America, 9 in the Hawaiian Islands, 13 in the Philippines and 16 in the vicinity of Japan, percentages remarkably similar to those of the known Hyoryubutsu or sea scruff. Back in the 19th Century, there were reportedly two Japanese shipwrecks every year. You can imagine the debris drifting away from the coastlines at the mercy of the wind and current.

My friend, a marine accident investigator, who traveled around the globe on a boat in his prime, left with me A Captain’s Diary from the 19th Century. History recorded many castaways off the Japanese seashores during the Tokugawa Shogunate, most notably John Manjiro (1827-1898) and Joseph Heco (1837-1897). John Manjiro served as the Shogunate interpreter when U.S. Commodore Perry opened up the doggedly closed border policy of the Japanese seclusion. Joseph Heco was the first Japanese immigrant to the U.S. and reportedly was introduced to President Abraham Lincoln through California Senator Bill Gwin, to whom Heco served as a secretary in Washington DC. Both were rescued by American boats and taken to the U.S.

The subtitle of A Captain’s Diary is “Jukichi’s Four Year (1813-1817) Odyssey Across the Pacific, through California, Alaska, Kamchatka, and back to Japan,” which was translated to English by Richard Sczippl, professor of Nanzan University in Nagoya. I saw many other names credited in the book as contributors, annotators and researchers. The original Japanese text was written in 1822 by Hirochika Ikeda, a scholar and a vassal of Lord Suganuma. I saw the names of father and son, Taichi and Yasuhiko Suzuki, as the discoverer of the author Ikeda’s book and the annotators. I saw also the name Katherine Plummer, a Californian, residing in Japan as a YMCA English teacher. She was a dedicated researcher of Japanese castaways. In the appendix was Plummer's gallant discovery in Boston of a letter written by Captain William Pigot who rescued the surviving crew of the shipwrecked Tokujo-Maru, including Jukichi, which verified that it was a true story. Yes, Jukichi landed at Refugio Beach in 1813, accompanied by Captain Pigot of the British ship “Forester” which precedes landing records of all other Japanese.

Today, this very place is a California State Beach that belongs to the City of Goleta, just 15 miles west of the campus of University of California, Santa Barbara where my daughter works. It is a very scenic and open beach to the Point of Conception, with the Santa Rosa Mountains in the background. Mission Santa Barbara was dedicated in the l780’s, so Jukichi’s landing was about 30 years after the dedication. Jukichi rode double-up on a horse and visited Ortega Ranch. He was advised that he was in New Spain. The next port of call seemed to be Bodega Bay to the north, but Jukichi met Russians there.

The ship Forestor sailed all the way up to Kamchatka via Sitka, Alaska and Jukichi knew that Captain Pigot arranged with the Russians his return route to Japan through Etrofu, one of the Kurile Islands. The friendship that developed between Captain Pigot and Jukichi is beautifully written.

I questioned why Jukichi had not written about his adventures himself, since both John Manjiro and Joseph Heco had authored their own memoirs. Since both John and Joseph secured Samurai status, they had the freedom to publish. Like all others in similar situations, Jukichi was banned from disclosing what he saw overseas after the magistrate officers took his depositions. Depositions by Jukichi and others often turned up in the underground as the hidden sellers reportedly dealt with some low-paid Samurais who wanted to add to their income.
Posted by riodan at 2:09 PM 2 comments:

The Japanese proverb '2-gatsu wa nigeru 3-gatsu wa saru', (February slips away, March departs) hints that both months are scurrying months; the issues we face are how to seize days. The Ides of March per Roman calendar is March 15, the day Julius Caesar was assassinated in 44 B.C. My favorite author, Thornton Wilder, wrote a masterpiece of the same name as a novel in letters, creating imagined documents, including Caesar's journal. I don't deny the somber mood these days may brew. Another Ides of March 2011 will soon be upon us be it good or bad.

The following is the story of the Ides of March, 1945. The US Library of Congress Cat No. 83-90348 “King Of the Heavies” by Glenn R. Horton, has an account on Pages 84/85 by the Navigator Lt. Harry Hagen, of Lt. Carl Ortman’s crew of the 528th Squadron, 380th Bomb Group revealing his experience of March 15. Lt. Hagen's flight had been on a weather recon, heading up to Formosa. The flight had left its base in Mindora, Philippines at 3:00 AM, flew to Formosa and probably searched for an hour before checking in with the weather data. At this point, the plane started developing engine problems on the return trip. The problems kept getting worse until it became quite serious and the pilot ordered to abandon the plane. This location was about one hour flying time from Formosa. Lt. Hagen thought that he had been in the water for nine and a half hours before he had an opportunity to signal a search plane. To his relief, the search plane spotted him and dropped a life raft.

Yes, Lt. Hagen and other crew members were all rescued. Who rescued them? It was Raymond Warner II, with whom I share our granddaughter and grandson (Raymond IV). He had his own version of the story. He was not on the search mission but miraculously flew over the drifters. Raymond IV, now 8 years old, calls him Grandpa Ray and me Grandpa Rio.

Ray, the B-25 navigator, 822nd Bomb Squadron, 38th Bomb Group, took off from Lingayen, Luzon on March 15 with fighter escorts gleaming in the sunshine toward the northwest destination where the Japanese convoys had been reported. However, the weather was beginning to change and up ahead, a definite line of a fog bank could be seen from the southern tip of Formosa out to the west past Pratas Island on over toward the coast of China. Approaching the designated target area the weather got even worse and it became even more difficult to see the wing tips. The order was issued to proceed to a secondary target to the west coast of Borneo.

Ray wrote in his memoir that "we were offshore quite a distance, about hundred and twenty miles, when we made our turn. We were flying at 3,000 ft. once again. Ten minutes after we made the turn I saw a flash from the surface of water. It appeared to be the reflection of the sun from a mirror directed at us. I immediately notified Tate who contacted the Squadron commander, we asked permission to go down and investigate. Permission was granted and we descended closer to the surface of the water. Floating in a Mae West inflated vest was a man trying to get our attention. Air Sea Rescue was contacted and another B-25 from our base back at Lingayan was sent out to relieve us".

Ray volunteered to fly again as an air-rescue member to make sure everyone in the wild ocean drifting further apart was picked up by sea-rescue teams.

Ray recalls, he had observed a few weeks before, another "Bail Out" B-25 crew, looking safe in a life raft, waiting for air-sea rescue. Sadly this crew became MIAs, as the search encountered weather problems and were unable to spot the drifting raft. He promised himself that he would react more aggressively and ensure rescue at all costs. He seized, subconsciously, the momentous flash of light and made sure they were survivors instead of MIAs on the Ides of March, 1945.

I am very proud of "Grandpa Ray" and look forward to seeing him again soon, surrounded by immediate families on my next visit to the U.S. 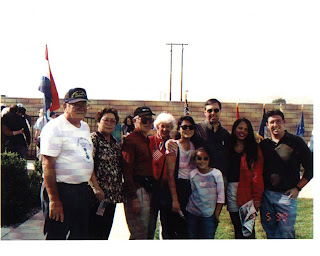 Ray II far left with his children and the Imamura in-laws
Photo was taken at the March Air Force Base, Nov. 5, 1999
Posted by riodan at 4:03 AM 1 comment: