Strategy of Enthusiasm Produced a Winner!

While searching the Internet looking for a friend of mine in the State of Washington, I came upon a site that led me to a businessman I had once worked with on a project about 20 years ago. I could not quite recall his name. He was once the Mayor of Vancouver, a high profile public servant. I figured there must be a clue as to what happened to him, so I googled "Vancouver, Washington".

A familiar Columbian newspaper article dated 2005 appeared titled, "Vancouver has found its heart and maybe its soul. They reside in the spirit that reinvigorated Esther Short Park." It was written by Tom Koenninger, editor emeritus. He wrote:

"Roots of Vancouver's coming of age may have started with former Vancouver Mayor Bryce Seidl and the Nihonga exhibit on Officers Row, and the survival of Officers Row itself in the mid-1980s. The goal was to re-energize the heart of the city, Esther Short Park and environs. Thanks to guts, energy, brains and no small amount of sweat, the objective has largely been met. What a change."

Yes, that's it! Bryce Seidl! I recognized his name. I remember that I liked him.

It was fairly easy to proceed once I knew his name. I found out that he is currently President and Chief Executive Director of the Pacific Science Center, a nonprofit organization in Seattle. This is the man I met and worked together with, on introducing the Nihonga (Japanese painting) exhibits in the City of Vancouver, Washington.

Why a Nihonga art exhibit in a small city like Vancouver, Washington? Kyocera International, my ex-employer, built a company called Kyocera Northwest there. Mayor Seidl was invited to the opening ceremony. He met then Kyocera President Kazuo Inamori and learned that Kyocera and Wacoal, another Kyoto based company, were jointly planning to bring a tour of traveling Nihonga exhibits to Paris, London, New York, Los Angeles and other major cities.

Bryce was interested in the project and asked Inamori to include Vancouver among the exhibit host cities. How well could Vancouver, such a small city, rank against those large capital cities in drawing visitors to the exhibits? Nobody listened seriously to the mayor, but Seidl had his ideas and a vision. He believed he could do it. He sent his plan to Kazuo Inamori, even advising him on the critical paths to take in order to make the project a success. Kazuo Inamori himself likes to do this type of thorough market research and simulation-proven studies, and he was moved by spunky Seidl. Gradually, Bryce's enthusiasm and persuasion took shape and weight, and moved the Kyoto people. Seidl's planning was superb - the selection of the venue at the historic Officers Row, the well-timed visit of a Japanese sailboat at the Columbia River basin, the invitation of several Nihonga artists to speak at the opening, even preparing souvenir pamphlets and prints, etc.

To our surprise, Seidl's plan culminated in attracting more visitors than any other capital city mentioned above. And can you guess why?

Bryce mobilized students in all the schools in the neighboring counties. I was dispatched for a few weeks from the Kyocera U.S. Head Office in San Diego to help in the preparation, and I saw Bryce rolling up his sleeves, working as hard as those involved at City Hall. I was very impressed. The event took place in 1986.

I saw a recent photo of Bryce Seidl on a Web site. His hair and eyebrows are turning white, same as mine. Maybe he is a bit younger than me. I found out he majored in ecology at UC Berkeley, and received an MBA from the University of Michigan. Between two careers, first as city mayor and currently as Executive Director at the Pacific Science Center, he has held many positions in the Seattle area: VP/General Manager at Simpson Papers, President of Fisher Mills, and President of Pilchuck Glass School, a glass art school that has much in common with Nihonga art.

I'm hoping to visit Seattle on my next trip to the U.S. and renew my acquaintance with the ex-mayor I admired.

Nihonga Exhibit
Kyocera jointly hosted the Exhibition of Modern Japanese Nihon-ga paintings with Wacoal Corporation in 1985 to promote international friendship and cultural appreciation by introducing Japanese paintings overseas and creating an international venue for exchanging art and culture. The exhibition was held in seven cities in five North American and European countries over two years and earned widespread acclaim.

"Hailing from Battle Ground Washington, a small city a few miles North of Vancouver, I grew up thinking that 'our' Vancouver was 'the' Vancouver. Of course later, when my travels took me farther from my roots in Southwest Washington, I learned that 'my' Vancouver was actually the 'other' Vancouver. The Vancouver that everyone else knew about was that one up North in Canada, or Vancouver BC. I often had to go through a long explanation of how there is also a Vancouver in Washington State just across the mighty Columbia river from the City of Portland, Oregon. 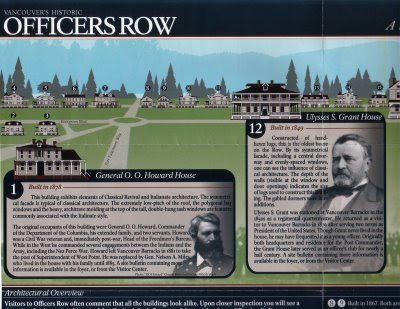 To me, Fort Vancouver and Officers Row was the place you went and spread your blanket early on the 4th of July if you wanted to get the best view of the fireworks display on the independence day holiday. As a child I never really noticed or realized the significance of the beautiful historical houses there along the row. But as a middle-aged woman, I now have more of an eye for the beauty that is there. If you are ever in the area, I highly recommend that you take a stroll down Officer's Row in Vancouver. And if you have the time, take a little detour North and see my hometown, the city where a battle didn't take place near the 'other' Vancouver, Vancouver USA." 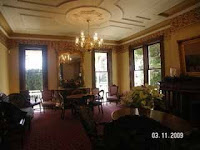 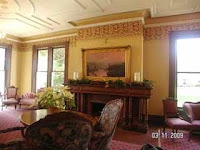 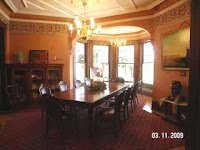 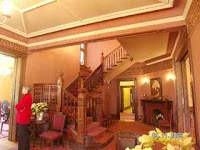 A Survey of Pearl Harbor Memorials Throughout the U.S.

The 9.11 Memorials seem to have eclipsed Pearl Harbor Memorials, but not quite.

I recently met with my old friends in Kyoto whom I traveled to Death Valley with once while working together in San Diego, California. We learned that we both coincidentally made sentimental journeys back to the U.S. in 2008.

My journey was a two week run in August from Calgary, Canada down to Glacier, Yellowstone and Grand Teton National Parks, covering Montana, Idaho and Wyoming, totaling less than 4,000 kilometers. But theirs was a month long journey of 10,000 kilometers or 6,214 miles. He and his wife crossed the Rockies two separate ways.

He wrote that they enjoyed autumn foliage one way and saw the mountains in early winter attire with some snow scenes on the way back. He visited Yellowstone, like me, then drove east on Interstate 90 (5000 kilometers from coast to coast) to see Niagara Falls, then south on I-75, and back on I-70 to the Rockies. He highly commended the condition of the reconstructed highway.

Then he wrote that he came across Pearl Harbor Memorial signs more than once on his journey, a reminder of the bitter war in the Pacific. The Japanese committed one of the worst conduct of the century. He pointed out Route 75 in particular and sent me the photograph on the right. 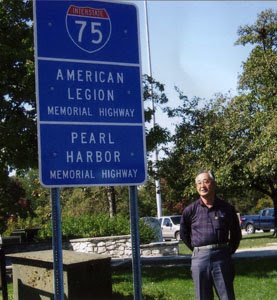 Sign on I-75 with my friend Mr. Doi
This photo inspired me to check into and hunt Pearl Harbor Memorial highways in the U.S. Continent. Surprisingly, more designations were announced after the year 2000, as if Americans were re-immortalizing an event that had taken place almost 70 years ago.

1. State of Georgia, HR1092, 2/26/96
Whereas, on December 7, 1941, the Japanese attacked Pearl Harbor and many innocent and brave civilians and soldiers lost their lives, their families, and their community; and citizens of this state have historically paid homage to those survivors and victims of World War II fighting; it is befitting that the State of Georgia honor and respect the brave men and women who withstood the horrific attack; and the designation of a portion of Interstate Highway 85 as the Pearl Harbor Memorial Highway is an appropriate acknowledgment of the courage of those survivors. Now, therefore, be it resolved by the General Assembly of Georgia that the portion of Interstate Highway 85 running through Troup and Harris Counties be designated as the Pearl Harbor Memorial Highway in recognition and honor of the exemplary way the survivors of the worst attack on American shores faced such a crisis.

2. State of Ohio, Revised Code, Chapter 5533.241,
3/5/04 & HB 70, Sign posting, 10/13/03
The road known as interstate route seventy-five, running in a southerly direction from the city of Toledo in Lucas County, through the counties of Wood, Hancock, Allen, Auglaize, Shelby, Miami, Montgomery, Warren, and Butler to the city of Cincinnati in Hamilton County, shall be known as the "Pearl Harbor Memorial Highway." 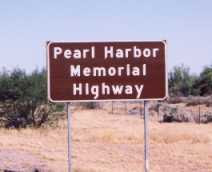 Chaptered 7/2/05. Resolution Chapter 72.
I-10 is the Pearl Harbor Memorial Highway throughout Arizona, except for the portion through downtown Phoenix.

I-10 is the Pearl Harbor Memorial Highway throughout New Mexico.

5. State of Missouri
RSMO-Chapter 227.330
Missouri Revised Statutes, 8/28/08
The portion of U.S. Highway 63 located within a county of the third classification without a township form of government and with more than fifteen thousand seven hundred but less than fifteen thousand eight hundred inhabitants shall be designated the "Pearl Harbor Memorial Highway". The department of transportation shall erect and maintain appropriate signs commemorating said portion of U.S. Highway 63 at its discretion.

12. Pearl Harbor Memorial Bridge 2
This bridge carries Interstate Route 476 (aka "the Blue Route") over the Schuylkill River, in Conshohocken, Pennsylvania. Designation in 2005. Under extensive reconstruction. 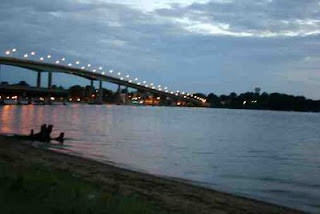 14. Pearl Harbor Memorial Bridge 4
New York State Assembly, Chapter 225. in 2003
A bridge in the City of Olean, County of Cattaraugus

I am probably missing several other designations. And I'm sure, quite often, many signs go unnoticed by drivers and even local American residents do not know about the designations. For instance, I didn't notice until recently that the Triborough Bridge I crossed often in New York was designated as the Robert F. Kennedy Memorial Bridge. There are others that are slowly and surely being accepted by the public such as the many Martin Luther King Jr. Memorial streets found throughout the nation.
Posted by riodan at 7:39 AM No comments: