Nagasaki and Kokura is strangely bound. They are two ends of Nagasaki Kaido, a famous road next to the five Kaidos, connecting Edo and Kyoto and others in Edo period. Nagasaki just marked the 68th anniversary of the dropping of an atomic bomb this Friday with more than 6,300 people attending the ceremony including A-Bomb survivors and bereaved families at the Peace Park. It is well known irony that Kokura was the original bomb target but clouds over Kokura changed the bomber’s flight path to Nagasaki.

I recently read a travel log of a walker who took the 280 km Nagasaki Kaido. His name is Takuji Matsuo, who lives in Shimabara, Nagasaki. He was a Shimabara Junior High School principal and now serves as a Shimabara Castle Archive specialist. He visited shrines and temples, took notes and photos, updated local maps and news, documented folk stories while traveling. He divided his travel plans into several legs to suit his convenience, so the entire trip took a whole year to complete. The walking itself took only 17 days or 420,000 steps as per his trusty pedometer. 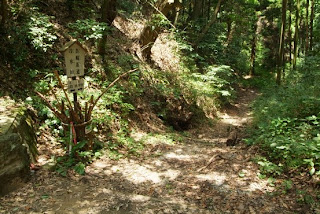 I was interested in his description of Hiyamizu (cold water) Mountain Pass, the Hakone Pass of Nagasaki Kaido, the most difficult and laborious route. It is sometimes called Pan Pass, because travelers scooped mountain water with a pan to soothe their thirsts. Yes, the pass was a hard one. He perspired intensely, but endured.

He wrote that all the railroads and highways today come and go there under their respective tunnels and travelers enjoy a great view from above. Records show an elephant calf, a gift to a Shogun, passed here.

It's a straight line from Dazaifu / Tsukushino to reach Iizuka / Kurosaki / Kokura. Uchino is the station coming off the Pass and Matsuo, the writer, found happily, that Uchino retained its form the way they were during the Edo days.

A "Nagasaki Walk" is occasionally held like "Earth Walk" or "Peace Walk," in spring and autumn by children and adults alike, sponsored by local municipal governments or newspapers.

This spring (2013), the city of Kitakyushu where I live, had a one day Nagasaki Walk Event to commemorate its 50th Birthday with great participation by its citizens. The full official course was from Tokiwabash Bridge (the elephant on the way to Edo) to Koyanose Station, including the Magari Row of Pines. I'm sure the path the elephant took depicted by artist Jakuchu was the same one. Other shorter courses were respectively 12 km and 15 km. 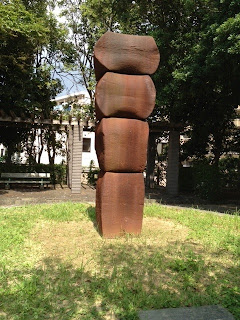 I read about the "Lt. Nicholson Monument" in the recent Kitakyushu City Magazine "Kumo-no-ue" (Above the Cloud) No. 18. The monument must be in the same ward "Yahata-Nishi" where we live.

Who so blind as he that will not see! So true and I know the area well. I made a detour recently on my way back from the newly built library next to the remains of Nagasaki Kaido row of pine trees (see *Note below). The venue was closer than I thought. Alas, a bit off where the walkway crosses (熊西緑道ーKumanishi Greenway), within a stone's throw away and the monument was hidden a bit so as to be hardly noticed. A huge palm tree sits aplomb at the above crossroads, the corner across from Kumanishi Elementary School Compound. Passers-by would be more attracted to the palms than a cluster of rusted irons, unless otherwise advised.

The English text on a metal plate reads:

"Not so long after WWII, on Nov. 12, 1947, the airplane piloted by Lt. Rodney Nicholson of the U.S. Air Force ran into trouble when it was flying over this area. Even though he had the opportunity to bail out, he chose to remain at the controls, so as to avoid crashing into the residential area. He crashed into a nearby field owned by Mitsubishi Kasei Corp and was killed. The people in the area admired his humane act and built a monument in his memory, whereby they could pray, in May 1948. 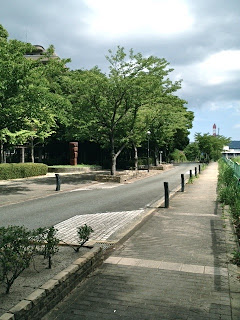 However, because of the redevelopment of the city, we obliged to break the monument in August 1988. The Kitakyushu Municipal Government and Mitsubishi Kasei Corp decided to erect a sculpture for the eternal memory of his heroic action and asked Kiyonori Bori, an iron sculptor from the area, to create a sculpture. Lt. Nicholson's heroic act will remain in the heart of our citizens forever with this work of art.” - April 1989

It is a well written plate and I'm deeply impressed. While working in the naval town of San Diego, California, there was a similar plane crash incident. The naval jet had trouble as soon as it took off at the Miramar Airbase. The pilot tried to control his jet to fly out to the ocean in vain. He ejected himself right before the jet crashed into the parking lot of our Sorrento Valley plant. A dozen cars and the plant roof eaves were damaged but there was no loss of human life.

I read also Nicholson's plane knocked off the Elementary School building eaves, while classes were in session. Nicholson's death must have saved many school children.

Years ago, I belonged to the Kurosaki "Prince Hotel" tennis and swimming club center. However, the change of hotel ownership kept me away for awhile from the area. The swimming pool and skate rink were demolished first. Then home appliance and food shopping centers emerged, replacing the indulgent sporting villa. Outdoor tennis courts turned into restaurant rows. Kept vacant after bulldozed and compacted was where the indoor tennis courts and club house were across from busy State Route 200. Nicholson's monument may be exposed soon when the new development move surges. I hope it will stay eternally as written on the plate. 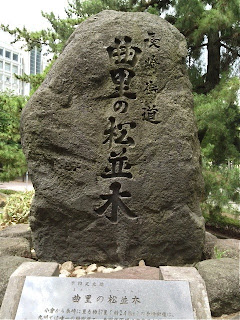 Historic Nagasaki Kaido in Kyushu, started from Nagasaki and ended at Kokura, the stretch of walk of 228 kilomters (142 miles). The walk usually took one week. In the Edo-Tokugawa Shogunate days, there were 25 posts / stations to stay and rest in between Nagasaki and Kokura. Feudal lords in northern Kyushu had to commute at certain intervals to Edo in procession for the dual residential duties in their continued subservience to the Shogunate. Dutch traders also tread the same route, including famous Philip Franz Von Siebold (1796-1866), Engelbert Kaempfer (1743-1828), Carl Peter Thunnberg (1796-1866), etc. Kurosaki Station is between Kokura (last station) and Koyanose. Rows of pine trees were famous between Koyanose and Kurosaki. Most of them are gone. Today, Kurosaki kept 86,000 sq ft as a park - 310 meter (1000 ft.) long, 25 meter wide (80 ft). 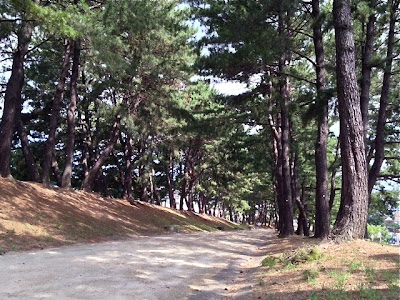