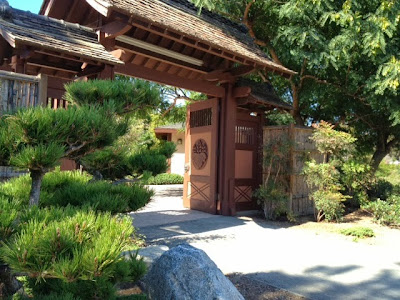 Recently, I had the chance to re-visit the Balboa Park Japanese Friendship Garden. I tried to rely on my memory to find the entrance from the Organ Pavilion, the center of San Diego Balboa Park. I found myself at the VIP (or service) gate which was locked to the general public. Once I realized I was at the wrong gate, I stopped two girls who seemed to be returning from lunch and told them that I had an appointment with the Japanese Friendship Garden Executives. They opened the gate and ushered me into the nearest building, which was their administrative building, and fortunately exactly where I was supposed to be.

I found about five people there, one young man and four young women. From their appearances I guessed they were sales people selling wedding banquets. The waiting room table was full with wedding service advertisements for photographers, florists, hairdressers, and the like. When I was walking out around 4:30 p.m., a banquet setting was in preparation. I saw outdoor lighting, catering gear, band crew instruments, and other things that suggested a wedding. Seemingly the main business associated with the garden is related to wedding banquets. These young people were very lively, and I am sure they were quite good at selling the banquets. The Japanese Garden has a long history of catering to weddings; the brochure said 15 years of service. 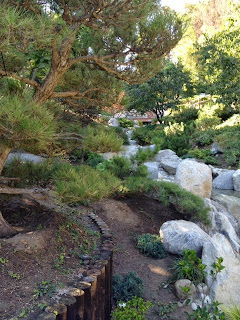 The conceptual starting date, however, could go back at least 25 years ago. Will Hippen, Jr., Honorary Consul General of Japan in San Diego, 1st President and donor himself of the Japanese Friendship Garden, raised the banner and blazed the trail. He had his own Japanese garden complete with Koi pond and tea house, where he held a reception party more than once when the Japanese self-defense Navy frigate visited San Diego port. He invited officers and sailors alike, members of SD-Yokohama sister-city relations to mingle with food and drink, while the Japanese naval band played both US and Japanese music.

Two ideas for a Japanese Garden were circulating. The first had to do with the city of San Diego contemplating if its Balboa Park gorge area could be developed into a Japanese garden. The second consisted of a local group of Japanese Americans trying to rebuild the Japanese garden, a popular 1915 Panama International Exhibit, which was destroyed during WWII. It was Will Hippen who combined these two ideas into one grand plan. He first asked Mayor Wilson, and then his successor Rodger Hedgecock to sign a 100-year lease agreement to use the gorge in Balboa Park as a Japanese Friendship Garden. Thankfully, he ultimately succeeded. I was honored to attend the signing ceremony at the Mayor’s office.

A fund raising campaign started immediately with a very tough requirement; the lease agreement stipulated there be enough money to break ground on the project by a specified date. My former company, Kyocera, took the lead in the campaign, as Dr. Inamori, President, was thankful and enthusiastic for being listed among the best San Diego businesses to participate in the project. The Japanese Friendship Garden concept struck his heart and his first comment upon visiting Balboa Park was “Kyoto where he resides has more challenging venues than Balboa gorge and he never worried about the awkward cliff and sharp slopes to landscape despite the misgivings of the local people.”

When I left San Diego in the mid-1990s, I remembered the Japanese Friendship Garden sitting only on top of the gorge close to the Organ Pavilion, the Meiji style gate designed by Storrier Sterns, the curved pathways along the bamboo groves, the exhibit house as the main event center, the Karesansui (dried garden), the outdoor tea reception stage, etc. The crepe myrtle I donated in memory of Denny Ikeda (a Kyocera employee gunned down by two ruffians near Sea World) was still there, extending its branches.

Today, going down through Stern’s gate (which was moved to the newly expanded garden), I was thrilled to see a couple of pseudo-glens already covered with white stones—one cascade to be covered in water, other perhaps to remain dry—as I strolled down the cherry tree pathway. Mike Kawamura, the Japanese Friendship Garden VP and my fellow colleague at work, told me that more than 100 cherry trees were transplanted already. Honestly, I felt uneasy as to whether my physical stamina could carry me down the gorge and back to the top. Thanks to the ADA compliant strolling pathway, I had no problem, but found myself exhilarated with the walk while viewing the camellia/azalea slope garden. 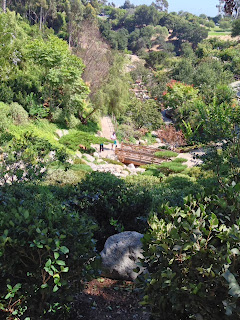 As per their latest new release, the Japanese Friendship Garden, just a month ago, had the August Moon Gala and Awards Dinner celebration to open its north end of the garden expansion before the official public opening. This addition is now open. I saw many people walking down the roughly planted gorge, crossing the Dragon Bridge, zigzagging the cherry tree grove, stopping at one of the pairing ponds.

The other pairing pond, larger than the pond near the Dragon Bridge, is coming with what the Japanese Friendship Garden is calling the “Pavilion” and “Amphitheater”; the next and perhaps the last phase of construction. It will be located where the horse stables of the SD Park Police were once found. I heard that the Pavilion could be PAGODA shaped. That’s a fantastic concept and could contribute to this garden becoming the best West Coast Japanese garden; perhaps rivaling the Sankei-en gardens in Yokohama, Japan, which acclaimed the world’s best by Tagor and others. Dennis Otsuji is confident. The Japanese Friendship Garden President said they could definitely finish all the construction by 2015, the year SD will celebrate the 100th anniversary of its Panama Exhibition at Balboa Park.