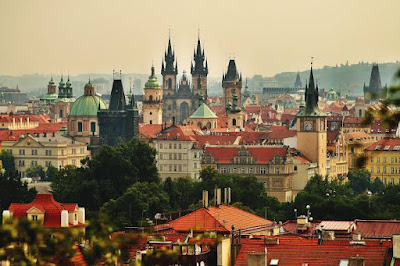 Reflecting on my limited global travel experience, I wish to strongly recommend to friends - be sure to include Prague if you are planning to go to Europe.

Prague can offer unusually deeper cultural / historical insights than any other European city. I shall say better than Vienna, London, Paris, etc. You can witness old and new architecture; Gothic, Romanesque, Baroque, Rococo, even Art Nouveau and contemporary - castles, churches, monasteries, libraries, museums, gardens and parks. I read and heard comments by visitors to Prague saying that it was as if they were visiting a fairyland.

The above quoted Czech poet Nezval also wrote about the River Vltava running through Prague:

‘Bon voyage, Vltava!' Your bubbly string playing string for us glorious tunes along with harp while the Vysehrad* soaring up in the bright moonlight as if straining its ears to listen to Vltava".
(*Vysehrad - the name of the hill where the Prague castles or fortresses are)

Nobel Laureate poet Jaroslav Seifert also referred to Vltava as his river of hope and faith. And Bedrich Smetana dedicated his first symphonic poem “My Fatherland” (in Japanese) to Prague. The Czech name of this symphony is “The Moldau”, meaning Vltava in German. I enjoyed the Vltava riverboat cruise when I was there.

My favorite Mucha’s artwork are St.Vitus Cathedral’s stained glass windows. I remember there is a colorful area called Golden Lane where it was rumored alchemists transformed lead into gold. In reality, the area was home to the castle’s gunners and goldsmiths, where Franz Kafka once lived. The strangely named “Powder Tower” enchanted me.

I returned often to Wenceslas Square recalling the so-called Prague Spring or Velvet Revolutionary demonstrations. In the Old Town Square, I marveled at the old but still operating astronomical clock and bustling flea market.

My visit to Czech was in the spring of 2005 when I visited the Architectural College named after Jan Leztel (1880-1925), the architect who built the Hiroshima Prefecture Business Exhibition Hall Building. The building itself was destroyed by the Atomic Bomb in 1945 but the dome skeleton has been famously kept as a war memorial, now designated as a UN Heritage site. The college is in Nachod, East Bohemia, a border town to Poland through Krkonose Mountains (see riosloggers 2009).