Lowland corridors were my first impressions of the Czech Republic as I traveled by train from Sachsen, Germany to Bratislava, then on to Budapest, Hungary with stopovers in Prague and Pardubice. The northern border of Czech shares the Krkonose Mountains with Poland and is as high as 1,600 meters above sea level. The mountain ridges curb south to the right and comes down to an elevation of 1,000 meters, where part of Poland is surrounded by the Czech Republic. Nachod, the gateway to Poland and noted for Primator beer brand, is situated there and has a population of 22,000. In 2005, I visited the city, with the help of my Czech friend Jiri Psenicka, a Pardubice Toastmaster. 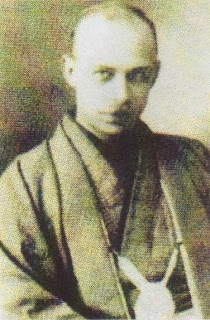 Jan Letzel (1880-1925) had been recognized by the Japanese as the designer/architect of the "Hiroshima Prefectural Commercial Exhibition Hall" (built in 1915) and the postwar "Hiroshima Atomic Dome" , with UNESCO designation. When Hiroshima celebrated Letzel's 100th birthday, Czech writer Olga Stolskova participated. Pavel Hayslore, Letzel's great great nephew was invited to Hiroshima on August 6. 2000. Thanks to the excellent pre-arrangements of my friend Jiri, I had a chance to visit Nachod's two year College of Architecture, which was named after Letzel in 2000, the same year Hiroshima celebrated Letzel's 100th birth year; the city of Nachod honored the architect as "Letzel Year".

Jiri drove his Czech car "Skoda" that day for me. We left Pardubice, where Jiri worked and lived with his family, early in the morning and headed for Nachod, about 80 kilometers northeast of Pardubice. It was a smooth, scenic country drive, after hitting a little morning traffic in the Industrial Hradec Kralove. Prinicpal Ing. Chraska met us in his room in the company of Vera Vlckova, the Englsih teacher in charge. They treated us to breakfast before we went to Vera's English class. 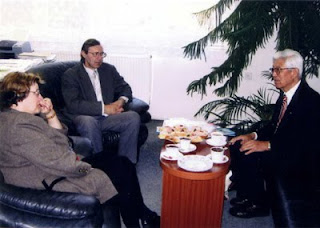 In my address to the English class, I gave a brief talk on the "island" Japan, rich in marine and farm products, but exposed constantly to the threats of nature, such as seasonal typhoons, earthquakes and tsunamis. I told them about the earthquakes that just hit Fukuoka after my departure and about northern Kyushu where I live, and the telephone conversation I had with my wife about the earthquake. I told the students that Jan Letzel himself experienced the Great Kanto Earthquake in 1925 that made him build the dome sturdy, which withstood even the atomic bomb. I emphasized that the Japanese people were determined not to be engaged in any war again so as not to repeat the horrors of Hiroshima and Nagasaki. After my speech, I presented Japanese souvenirs that included fans, picture postcards, chopsticks. During the Q&A session, I was requested to demonstrate how to use chopsticks, and sing some typical Japanese songs. I sang the "Sukiyaki" song, a Japanese pop tune and "Sakura", the cherry blossom song.

After class, Ms. Vlckova took us to the grave site of Jan Letzel, then to the nearby castle on the hill. We had lunch at Masaryk Square (named after the first President and founder of Czechoslovakia, 1850-1937). She bit her lip when she spoke of the poor student exchange offers, despite her willingness to deepen ties with Japanese counterpart colleges. On our way back, Jiri drove me to Ceska Skalice, not far from Nachod. There is a national park and forest called Ratiborice and a summer palace a Bohemian lord built in the 18th century. It was off-season so we met no one while visiting. The brimming river was running through a scenic area with a water mill, cottages and dams.

Jiri pointed to the stone statue of a stooped grandma and children looking up to the sky, which depicted a scene from the book written by Bozena Nemcova (1820-1862). Bozena‘s two best known books are The Village under Mountains and The Grandmother (1855). The latter is about a young girl named Barunka (name is a pet form of Barbora) and her childhood with her grandmother in the countryside. Both books were inspired by Nemcova's own childhood in the village of Ratiborice, where she lived with her parents, siblings and maternal grandmother, Magdalena Novotna. Grandma, on her deathbed, asked the children to tell the bees her message. A couple of mock-up beehives can be seen on the slope of the river banks. The sprouting bare branches of poplar trees along the River Upa shone brilliantly in the sun. 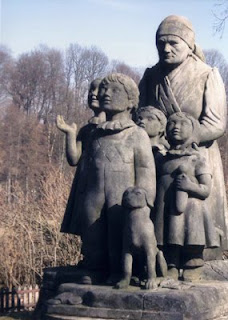 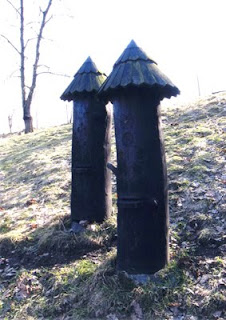