Hiraodai Karst Plateau and a Folktale 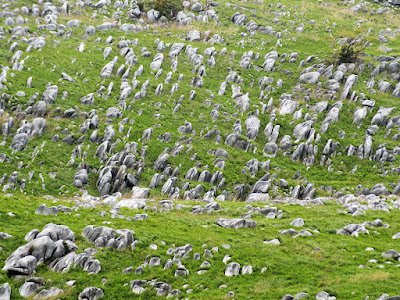 Hiraodai Karst Plateau, equally famous as Yamaguchi Akiyoshidai, is southernmost Kitakyushu City bordering Kawaracho and Kandacho. Mt. Hiko, the sacred mountain where many aesthetics have spent time there, towers over the prefectural boundary between Fukuoka and Oita. The deep-blue Masubuchi dam is not too far. Boasting 3,000 acres (12 square kilometers), the elevation is between 310 - 710 meters. It is uncertain when people settled in Hiraodai because of the cold and snowfall in the winter. During the war, Kokura had the Imperial Army arsenal and the ammunition chambers in Kitagata. They probably thought of Hiraodai Karst Plateau as their ideal shooting range, however, there is no historical evidence of that. After the war the Japanese returnees from Taiwan and Korea, found their paradise in Hiraodai if they became farmers.


In the spring, Hiraodai is famous for its controlled burs of its fields. It was not to slay ogres as in the old folklore, but to burn dry and withered grass in the 'soline, polie and uvala' areas, to prevent wildfires. Field burning should be a common practice throughout Japan to renew grassy zones, prevent forestation, and maintain the green every year.

Upon returning from the U.S. in the mid-1990’s, I joined the local trekking group and visited this Hiraodai Karst Plateau, strolling up and down karst and exploring a few caves. About the same time I had a chance to visit Yunnan Province, China and the Shilin (石林 ) Stone Forest, the UNESCO World Heritage site that covers over 180 square miles. The tall rocks seem to rise from the ground in a manner somewhat reminiscent of stalagmites or with many looking like petrified trees, thereby creating the illusion of a forest made of stone. Limestone creates these otherworldly landscapes. However, the Shilin landscape is over millions of years old and spans thousands of miles. Once you step in, you may get lost in a maze of geology and paleontology. It was very different from Hiraodai. 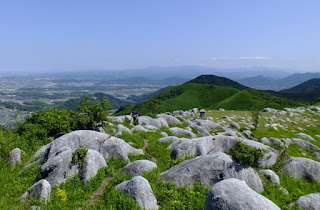 The local legend has it that there lived two demons in Hiraodai Karst Plateau, one named “See-demon”, the other “Smell-demon.” One day they took conferred about what offering to bring to their boss in the nearby Mt. Hikosan*. “Hmmm! How about bringing a concrete straw stone inside the famous limestone cave for his sword or a sheep shaped stone as an ornament? They talked quite a while but they finally decided upon offering a human child. In the past, they knew the boss demon raised human children as his retainers and extended his influence. When reared since childhood with the boss demon, these children eventually turned into demons.

These demons descended from Ryugahana to Satonotsuji through Fukiage Pass. The village people panicked with the sudden appearance of the demons and scattered in confusion. The demons caught one child on the first day. The returned to the village on the second day as well.

“See-demon”, "Can you smell it?" asked Smell-demon as they approached the village. “There is a scent of something nice coming from the village! Let’s find out!” As they descended, one village guard alerted the villagers with the temple bell. With the bell ringing, all the villagers hung rotten sardines at their doors. Two demons with sharp and keen eyes and noses got queasy, felt sick and hurried back to their dwelling. Despite the deterrence, the two demons came back on the third day well prepared with clothes pins to plug their noses and went on a rampage. After the onslaught, the villagers gathered to discuss how to slay the ogres and came up with a plan. The following night, the demons returned with their pins and found the village deathly quiet. The inquisitive demons reached the village square where a fire was burning. “There they are!” As they attacked the villagers, flames broke out all around all at once. Burning bamboos spilt with loud snaps and cracks. Pillars of flames shot up everywhere. The surprised demons panicked and retreated at full speed. The kidnapped child was rescued by the villagers during the turmoil. The crackling sound of burning bamboo scared them and the demons never returned to Hiraodai.