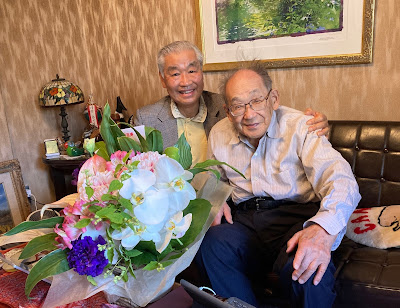 I took an overnight trip to Kyoto to attend a special event. Arthur Jonishi's "White Age" celebration was to start from 6:00 pm but was delayed to 6:30pm, as the turnout of over 500 guests was slow. The venue was the Reaga Royal Hotel in Kyoto, close to Kyoto Central Station. Perhaps the majority of guests were Kyocera people but an ex-Sanyo person was at my table for six. Arthur is a Kyoto University graduate, and a long time Rotarian; has many hobbies, like golfing and playing Go, so his friends should be quite diversified. 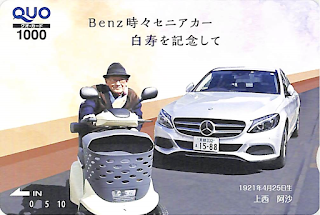 He entered the venue riding a motored "senior car", a gift from his Rotary Club, clad in a purple Sanga Soccer team jacket and donning a pandemic face shield. He needed helping hands to stand before the microphone. After the champagne toast, he spoke for half an hour. The rest of the hours were chats and meals. The nests of boxes were distributed to each table in paper bags. The hotel service was just to open the champagne bottle. This is the new “normal” these days because of the Corona virus. Each guest received a 50-page booklet "Footprints of A. Jonishi".

Arthur was drafted into the army during World War II in Dec 1943 in Tsuruga, Fukui Prefecture. On board the SS Teifumaru, an aging wooden ship, his troop headed alone for the Solomon Islands away from the main fleet. At midnight, he saw a US submarine surface without noticing his ship in the dark. Arthur saw some sailors lighting up for a smoke. When they saw the Japanese boat’s shadow, it immediately submerged and started discharging torpedos. Some said they saw a dozen streaming towards their ship. Arthur counted at least 7 or 8, which whizzed passed without incident. Good thing the boat didn’t carry heavy loads, like tanks and cannons, which would have kept its keel low. He feels very fortunate to have been aboard the SS Teifumaru, otherwise he would never ever have reached white age.

I noticed printed handouts in English on my way out. It's a collection of 'Arthur’s year end letters' to overseas friends and relatives over the past 10 years. Very interesting. 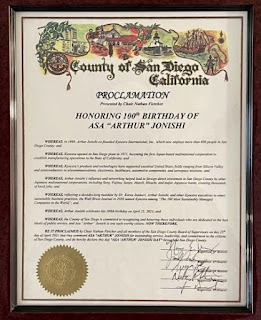 Mike Okuno, representing all ex-Kyocera employees visited Arthur in Kurama, Kyoto to hand deliver a bouquet of flowers to celebrate his 100th birthday - a new centenarian. Meanwhile, KII, San Diego Headquarters responded with an issuance of the San Diego Country of Board of Supervisors’ Proclamation honoring AJ’s birthday. 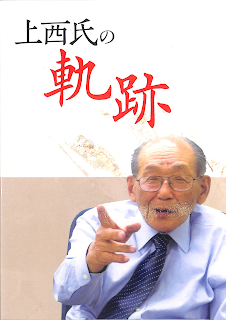 Mr. Imamura,
After a long time I visited this blog page. Glad I understand most of the descriptions you wrote. However I find myself not knowing of some of the words and phrases such as "nest of box" Surprised to know Mr. Jonishj is living such a long life. He must have been a well disciplined person. His story of "submarine attach" was most interesting. Without tanks and cannons saved his life!
Please continue this blog writing. I will be looking forward to visiting from time to time.

Mr. Miyano, thank you for visit and question. I beautified the boxed haute cuisine by the "nest of box". Simply it was a dinner box prepared by some high grade caterer. Yes, the submarine torpedoes missed Mr. Jonishi's boat in the dark. If the boat were heavier, all the crews should have found their watery graves. I appreciated your words of encouragement. Gratefully yours, imamura