"Eye witness to history” is one of my favorite running columns in the Yomiuri Newspaper in Japanese. I enjoyed Mari Matsunaga’s account of DoCoMo’s mobile phone developments as its i-mode editor-in-chief, which ran from early February  to mid-March. Then Ikuhiko Hata, an octogenarian historian, took over, beginning with the Tokyo Tribunal of War Criminals. 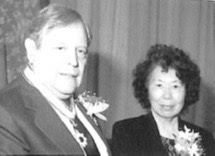 He wrote that after Tokyo University, he studied at Harvard in 1963 and at Columbia in 1964, and showed the photo of President Kennedy in the Dallas motorcade. I was in NYC in the1960s.  He and I witnessed the assassination of the President in the U.S.   He referred to a friend, Dr. Alvin Coox, who helped him secure the Asian Foundation scholarship in addition to the Rockefeller Foundation.  Dr. Coox!  My Goodness! I served as an initial Advisory Board member for his SDSU Japan Studies Institute in the 1980s. However, he passed away right after I left San Diego. I remember his spouse Hisako. I emailed my friend who knows Hisako. I received an answer and she is hale and hearty.  Hisako Coox has sponsored my friend’s life work of Japanese language promotion and annual speech contest in San Diego for the past 10 years. 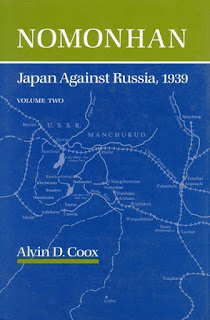 I first met the Coox’s at an LA reception celebration at the Japanese Consulate General. The reception invitees were mostly from the Japanese American business circles. The Coox's humbly sat apart. I introduced myself and my wife. I didn’t really know about him until I returned to Japan in mid-90s. His best selling and award winning “Nomonhan: Japan against Russia 1939” (Stamford Press) was translated into Japanese in 1994 and hit the bookstore shelves in 4 volumes.

Then I read in a weekly magazine that Dr. Coox had a conversation with Ryotaro Shiba (now deceased), a famous writer and my alma mater senior.  Ryotaro was drafted to Manchuria when when he was a student and assigned to a tank battalion. He didn’t engage in war but got trained as a tank trooper and was knowledgeable enough to discuss differences between Japanese and Russian tanks. The Nomonhan (battles of Khalkhin Gol) survivors would have told him how miserably they were defeated. The BT-5 Soviet tanks, copied from an American designer, featured track fitted transportation, high-speed mobility, overpowering anti-tank machine guns, and equipped with a flame-thrower.  One weakness of the Soviet tanks were that they were fire-prone. The overheated gasoline engine easily caught fire - alas - the Japanese infantrymen, without tank or artillery support, found that they could knock out gasoline-powered tanks and armored cars with Molotov cocktails and mines. About 120 vehicles were destroyed in this manner, but the Japanese soldiers, who had to get up close to deliver a satchel hurling attack, took heavy casualties. 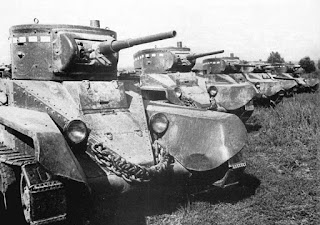 Ryotaro did in fact interview Nomonhan survivors like Dr. Coox, apparently with ardent hope of writing about them, but stopped pursuing it. Many people wondered why. Most plausible to me was that he heard, with shock, that there was a similar attempt as depicted in the US movie “Saving Private Ryan” to force the war to an abrupt end.

I’m surprised a younger writer Haruki Murakami (1949- ), Kafka and Jerusalem Prizes winner, touched upon Nomonhan battles in his 600-page “Wind-Up Bird Chronicle” (the Chronicle hereafter) as a story within a story. I got wind that his father once conscripted in Manchuria during WW2.  I read the English translation by Jay Rubin.  There is a couple of places that is relevant in Book l Thieving Magpie – in Chapter 4, High Towers & Deep Wells - O, Far Away from Nomonhan and Chapters 12 and 13, Lt. Mamiya’s Long Story Parts 1 and 2. The Chronicle has 3 Books and seems still unfinished. 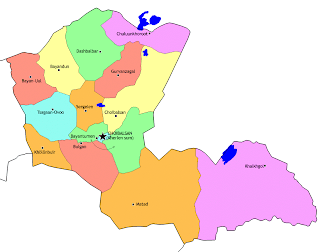 Briefly, at the pre-battle stage, a horse-riding party of 4 Japanese secretly crossed the River Khalkhin, the controversial Outer Mongolia/Manchuria border, a violation by itself.  A self-proclaimed civilian named Yamamoto had a top secret mission to plot probable pro-Japanese Mongolian agents (undisclosed to the escort). To escort him safely, 3 soldiers were chosen. They were Lt. Mamiya, Sgt. Hamano, Cp. Honda. An injured Yamamoto, back from an errand, ordered the immediate departure. They had to wait for night to cross the Khalkhin Gol as they spotted Mongolian security. So, the party slept with Cp. Honda taking watch. Lt. Mamiya woke to find Sgt. Hamano killed lying on the floor and he and Yamamoto were captives. After Russian interrogations, Yamamoto was sentenced to an ugly slow death by knife flaying alive. Lt. Mamiya had to run naked for his life and jump into the dry well or be shot. Death came to Lt. Mamiya in the barren tundra fields buried deep in the well unknown by anybody.  He was overwhelmed with loneliness and despair waiting for his death. It was Cp. Honda,  by intuition on foot, who found and saved Lt.Mamiya. The existence of the well incident has a profound meaning in the Chronicle, as WW2 ruin and redemption.
Posted by riodan at 1:16 AM

Thanks very much for introducing Nomohan by Alvin Cook.  I got this book from Amazon about 15 years ago.  The first reading is a little bit confusing for me due to so many romanized Japanese names.  I did not know  that Japanese militarist were fighting Chinese at the same time they had the leisure to fight with Russia. How crazy and ignorant they were.  Three years ago I re-red this book and it was easier with my reading of Japanese, Japanese history and Imperial Japanese Army.  A Taiwanese who worked as at Minister of Foreign Affair in MancuKoku said he attended the Nomohan cease fire negotiation process for ManchuKoku.  On the paper it is Manchurian fighting Mongolian, in reality it is Japanese fighting Russian.  I guess that is why this war is known by so few people out side those who actually participating in it.

Thank you very much, Paul, for your response. I didn't expect much response because it is an old story.
I’m glad that my friend has been reading Coox’s book along with the relevant books and that there are still some people who showed interests in the incident that took place in an obscure nook of the world. I’m sorry
about a real tragedy that killed so many Russians, Mongolians, Chinese as well as Japanese. riodan