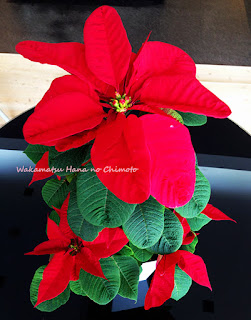 My favorite flower in December is the poinsettia, with its beautiful red, star-shape. It is called "Flame Leaf" in Central America, or "Flores de Noche Buena." "Shojoboku" is a Japanese name but poinsettia is more popular. I'm glad to report that a florist in Wakamastsu Ward in Kitakyushu where we reside started marketing a palm-sized brandnew poinsettia, calling it 'coinsettia' or 'princettia'. Its leaves are round and adorable."

Around the 15th Century, the sap of the plant was used to control the fever. The flower was brought to California over a 100 years ago by Dr. Joel Poinsett, the first U.S. Ambassador to Mexico. Most of the American poinsettia today now come from California. In fact, there is a town "Poinsettia" near Carlsbad where we used to live, a little north of San Diego.

The legend of the Poinsettia comes from Mexico. It tells of a girl named Pepita and her little brother Pablo. They were very poor but always looked forward to the Christmas Festival. Each year a large manger scene was set up in the village church, and the days before Christmas were filled with parades and parties. The two children loved Christmas but were always saddened because they had no money to buy presents. They especially wished that they could give something to the church for the Baby Jesus. But they had nothing.

One Christmas Eve, Pepita and Pablo set out for church to attend the service. On their way, they picked some weeds growing along the roadside and decided to take them as their gift to the Baby Jesus in the manger scene. Of course, other children teased them when they arrived with their gift, but they said nothing because they knew they had given what they could.

Pepita and Pablo began placing the green leaves, which turned into bright red petals, and soon the manger was surrounded by the beautiful star-like flowers that we see today.

There's no other holiday like Christmas. Most of us, whether Christians or not, celebrate the holiday without knowing how the traditions get started or what they signify. Christmas is much more when you know some facts behind the holiday. 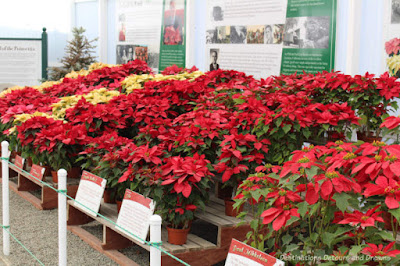 I am glad now I could write a small comment on a story of the poinsettia
of Christmas Festival in America. Fun to know the leaves of Poinsettia change
its color into red later. Informative. I liked the last sentence to end "Christmas is much more when we know some facts behind the holiday" Thank you. Hiroshi Miyano

Thank you for your comment re poinsettia. Now I know of coinsettia of Wakamatsu I feel fortunate reconnected. rio