People We Lost in 2020: Remembering the Yamadas

I learned about the sudden deaths of Joe and Elizabeth Yamada in May by reading the first digitized "Footprints", the combined Spring-Summer Quarterly issues published by the Japanese American Historical Society of San Diego (JAHSSD). I contacted my San Diego friends who was close to them. After my wife and I left San Diego in the mid 1990’s, our contacts with friends in the US gradually faded. What I learned from my contacts was that Joe had been suffering from Alzheimer’s, Beth was nursing him unsparingly. I understand a very fatigued Beth succumbed a few days later after Joe. I hastened my condolatory donation through JAHSSD. 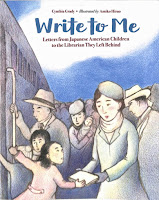 Around the same time, I was pleased to receive a complimentary children’s book from another San Diego friend Write to Me by Cynthia Grady (New Mexico), illustration by Amiko Hirano (Mass). It is a 30-page booklet, published by Charlesbridge. When my translation of Joanne Oppenheim's Dear Miss Breed was published from Kashiwa Book Publishing Tokyo, I received comments from many Japanese readers to cinematize it. The story was dramatized in San Diego by Andy Lowe in early 2000. However, it never occurred to me to make it a children’s book. It is a great idea to visualize the stories for children. I salute both the producer Cynthia and the illustrator Amiko for a job well done.

I noted Joanne Oppenheim, writer of Dear Miss Breed (Scholastic) sent her memorial writing for Joe and Elizabeth to JAHSSD. 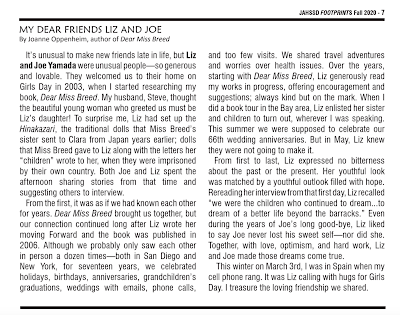 It was about half a century ago when I met Clara Breed, a fill-in secretary at the time, and Joe and Elizabeth Yamada, at the San Diego Balboa Park Japanese Friendship Garden Preparation and Funding Committee Meeting, headed by Will Happen Jr, the Honorable Japanese General Consul in San Diego. I represented my employer in the Committee. However, I did not know the relationship between Clara Breed and the Yamadas. It was after the funeral of Clara Breed that I came to know about their beautiful correspondences during their tense incarcerated camp life. In researching the childrens’ letters myself, I learned Joanne Oppenheim had started interviewing Breed’s children. I waited for her book to be published and translated it for the sake of all the young Japanese children upon returning to Japan. 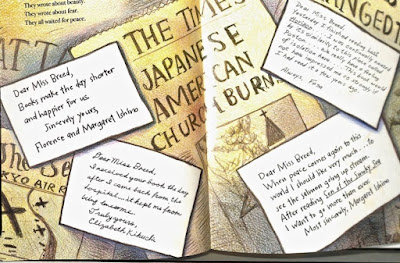