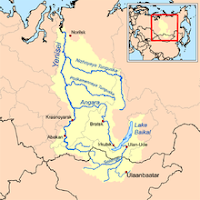 My neighbor Mitchie and I share some common interests. We both have traveled to Russia. Thus, this blog - Russia Part 3, Irkutsk & Lake Baikal. He sent me the related CD photo album dated Sept 2001. He and his wife with their close kin couple (called hereafter the Group) took the Trans-Siberian Railroad together to Moscow and Saint Petersburg and stopped by Irkutsk, the so-called Paris in Southern Siberia for 3 days. My interest was Lake Baikal, as a mythical birthplace of the Japanese race, originating from the northern Mongoloid groups, and often related to the world conqueror Genghis Kahn (1162-1227). We Japanese are born with benign skin markings ‘Mongolian Spot’, which fades and disappears as we grow. Linguistically the Japanese belong to the same Ural-Althaic Languages as the Mongolian. Japan was targeted by Kublai Kahn (1215-1294), the 5th Khan and his fleet force, not once but twice. By luck, Japan was saved each time by seasonal typhoons that sank Mongolian boats.

I liked to sing Russian folk songs when I was young. “By the Lake Baikal”, a bit bleak, was my favorite, and I still remember the song by heart. The melody belongs to an anonymous Russian folklore but the lyrics in Japanese were by the famous cellist Yoritoyo Inoue (1912 - 1996) - a returnee from Siberia as a prisoner of war. I want to say he is the best and irreplaceable lyricist of the song. Upon checking the original Russian folksong, I found the song was for the exiled Decembrists in 1825 to Irkutsk, lamenting their misfortune but pledging they would bear down and stand and return home someday. Please listen to the Japanese Dark Ducks Quartet’s melody I added for your listening pleasure. 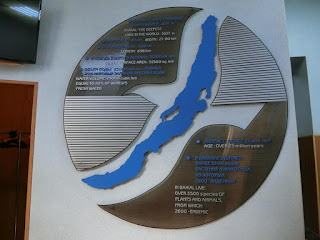 The first exiled people came to Siberia since the beginning of the 17th century - with the beginning of the Romanov Dynasty. Wild, remote, icy Siberia became the place of eternal exile and death of many hundreds and thousands of people disloyal to the government. The first Decembrist group from Petropavlovskaya took almost two months to reach Irkutsk. Brave wives followed. These people stayed and died in Irkutsk rather than returning. In 1917. the revolution hit with the abolition of the monarchy. Bolshevik (Reds) eventually won over the counter-revolutionaries (Whites) in 1923. The civil war chased remnants, nobles and refugees into Siberia, far out to Baikal, drowning them in watery graves.

After their overnight hotel stay in Irkutsk, Mitchie and the Group, headed for Litsvyanka (see the map), located 70 km southeast from Irkutsk, near the point where the Angara River leaves Lake Baikal. There at the mouth of the river stands the colorful Limnological Museum. They saw not only fauna and flora but enjoyed its fabulous aquarium. In 1996, Lake Baikal was designated a UNESCO World Heritage site.

Listvyanka is an old style Siberian village famous for its trade history, fish market and St. Nikolay’s Church made of logs in 1846 . It also has many scenic spots. On the way back to Irkutsk, they stopped at the Taltsy Wooden Architecture Museum in the open air. All of the structures represent the settlements of Evenks, Russians, Buryats and give an overview of the traditional home in Siberia. 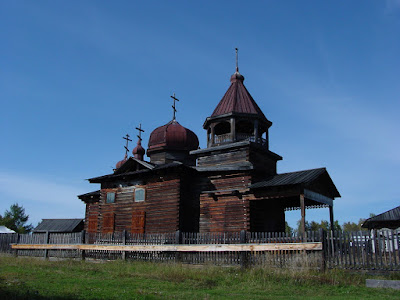 The closest I have come to Russia is seeing Rishiri and Rebun Islands from Wakkanai.
That was a long time ago - back in October 1993.

Thanks for the interesting read.

Maria, thank you very much for your notes. You've been to Rishiri and Rebun Islands, traveling from Wakkanai, the current Japan's northernmost post. Wow! That's quite a venture! What made you set to go? I'm dealing a shipwreck story of Captain Kodayu Daikokuya who landed one isle of Aleuts, three years there and then to Irkutsk for 5 years and to Sankt Petersburg. He eventhally returned to Japan after 10 years of Siberian vagrancy. I thank you for your visit "Irkutsk Part 2." rio

We picked the most northern spot of Wakkanai, which was a train ride totalling 32 hours, and the most southern spot of Japan, namely Taketomi Island.

Wakkanai's Youth hostel chef at that time was awesome. He prepared the best sauce to go with the best fish I've ever had.

OK, Maria. I thought you visited two islands now occupied by Russians.
But great to be both north and south ends of Japan. I have never been to Hokkaido. My friend invited me when the Olympic winter game was held in Sapporo but he passed away before the game and I missed the trip. Aomori is the northernmost place I visited. Naha in Okinawa is the southernmost point I was. You beat me. Finland is the northernmost country and Queenstown in NZ is the southernmost country I went. rio

Dear Mr and Mrs Imamura,
I felt sorry to know that you had halted this blog. I imagine the time at last has come for you both to. Time went by so quickly for me also. I became eighty years of age last month. Surprise! But still go to teach English to local elderly learners in Wakamatsu twice a week. I actually participated in your class once which was long long years ago, more than ten years. After all I came to concentrate on the Reading Class by Prof. Noriguchi. I even go there. Often times, I was visiting this blog, but always found it too hard to read through. Respect for both of you great experts of English language.

Russian folk song, "Baikaru-ko no Hotori" brought back my dear memories of young age! I saw its movie.

To Hiroshi Miyano, my fellow Kitakyushuan
Thank you for very much for posting your comment to riosloggers. We have a mutual authentic professor at Kitakyu U, Prof. Noriguchi. Nice to know you and you are in Wakamatsu. Triggered by your comment, I restarted my blog and wish you to visit at your convenience. rio


Imamura san,
I answered your comment on messenger of your Facebook now.
I hope you will see it there.