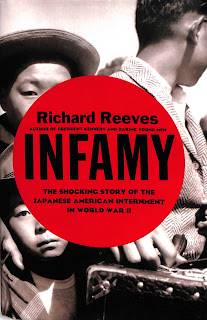 My son, who lives in New York, took the trouble to airfreight me Richard Reeves’ Infamy, a 340 page book newly published by Henry Holt & Co. The subtitle reads “The Shocking Story of the Japanese American Internment in World War II.” This is the first book Joanne Oppenheim’s Dear Miss Breed is quoted extensively. I was happy to find Clara Breed’s photo in the book. She was the children’s librarian at the San Diego Public Library, who met hundreds of young Japanese-Americans and during the internment years, she sent them letters, books, and gifts. I saw names and letters of many 'Breed’s children' - Louise Ogawa, Katherine Tasaki, Margaret Ishino, Fusa and Yukio Tsumagari, Ted Hirasaki, Hisako Watanabe. Now all these names will be remembered as unjustly incarcerated internees who endured and lived with grace despite the harsh circumstances during a sad period in American history.

I myself befriended Clara Breed when she served as volunteer secretary for the San Diego Japanese Friendship Garden Planning Board (SDJFPB) without knowing her background at all. I was so shocked to see her obituary and found out who she was upon my return to Japan. 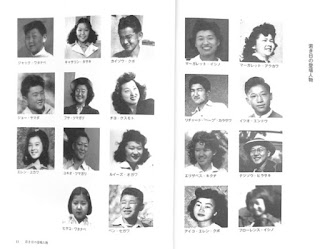 Sitting with me at the SDJFPB were Joe and Elizabeth Yamada, members of the 'Breed children' whom I contacted asking about some of the children’s letters that were sent to and saved by Clara Breed from Poston, Arizona. As per Elizabeth Yamada, they had been entrusted with the Japanese American National Museum (JANM) in Los Angeles. I visited JANM from Japan and copied some handwritten letters. Elizabeth Yamada then introduced me to Ted Hirasaki and Ben Segawa in San Diego. At JANM, I met Babe Karasawa who was serving as a volunteer docent. Soon I heard from my San Diego friends that Joanne Oppenheim had started interviewing the 'Breed children' with the intent of writing a book, suggesting that I wait for her book.

Oppenheim's book was well worth waiting for and inspired me to translate it into Japanese. One of my motivations for the translation was to make Japanese children aware of historical events. Oppenheim added court testimonies so that voices of internists from cities other than San Diego could be included. She toiled to try to cover over 10 relocation camps by quoting 1) Mrs. Roosevelt's diaries and 2) nationwide court testimonies. I’m glad that today, most of the Japanese municipal libraries and junior and senior high school libraries carry my Dear Miss Breed translation as I so aimed.

The following two stories from Infamy were particularly memorable to me.

The 1942 valedictorian of the University of California, Berkeley, Harvey Itano, was in the Sacramento Assembly Center on his graduation day. "Harvey cannot be with us today," said university president Robert Gordon Sproul. He continued, "His country has called him elsewhere," which was behind barbed wire (Page 81). I became acquainted with Dr. Itano, a La Jolla resident, with whom I played golf often. He was a great golfer.

By mid-summer Isamu Noguchi realized he was having a lot of trouble adjusting to life in the camp. He set up an Arts and Handcraft Center in Poston but no one came. He had a lot of trouble communicating with his fellow residents. "I am extremely despondent for lack of companionship," he wrote to John Collier in Washington, "The Nisei here are not of my own age and are of an entirely different background and interest." Noguchi's name is mentioned in Dear Miss Breed. Noguchi left Poston when the army allowed him leave. Isamu Noguchi was in Poston for 184 days. He wrote to his half sister Ailes "Please let my friends know that I am on my way. I feel like Rip Van Winkle" (Page 129).

Notes:
As the author wrote, the Japanese Americans in Hawaii were mostly exempt from being sent to internment camps except hundreds of them were closely watched by the FBI. Sand Island, a 5-acre island of coral in Honolulu, used to quarantine ships believed to carry contagious passengers in the nineteenth century, served as a location for a camp but the detainees were later sent to the 160-acre Honouliuli Camp in Oahu to join other German, Italian and Korean detainees. The Honouliuli Camp was designated earlier this year by President Obama as a National Park. It seems that each island had similar facilities of its own. The Big Island camp was at the Kilauea Military Camp (KMC), which was located in the volcano area, according to my friend Ron Takata who lives there.

I got a comment via e-mail from Kimiko Murata that reads:

I was much impressed by the lofty spirit of Miss Breed and hard work of Joanne Oppenheim to do reserch on her and your faithful translation. And recently Mr Richard Reeves supported all your efforts. I am extremely happy to know that. By the way, let me tell you my recent happening. In my class of the second grade of the Department of International Relations at Kitakyushu University,
I found the article about the "Internment." Its subtitle is "Japanese camps in the North America after Pearl Harbor."
The textbook"Global Issues Towards Peace" was written by Keiso Tatsukawa published by Nan'un-do and the topic was in the Unit 7.
So I was extremely happy to introduce your book to my students and I
photocopied some of its materials about the internment camps.
The text was about the situation of Canada but I add the one of the USA and about Miss Breed. Students seemed to be extremely interested in your book. Thank you, again for your contribution to the social justice.

Murata-Sensei, glad to know that Kitakyushu Univ students are studying
internment issues with your guidance. I looked up Amazon
Jp. The book was co-authored by Keizo Tatsukawa and Walter Davis
and published in Jan 2014.