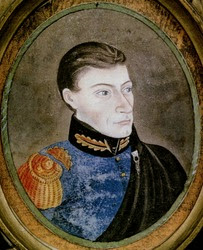 Philipp Franz von Siebold (1796-1868), a German doctor, who studied zoology, botany, and ethnology, plus earned a doctorate in surgery, obstetrics and internal medicine, prepared to leave in 1828 for Europe after a stay of six years as physician at the Dutch East India Company Dejima Factory, the only trading post authorized by the Tokugawa Shogunate.

His belongings became wet dampened during a storm, and when laid out on the deck for drying, discovery was made by a Nagasaki Magistrate official of banned maps of Japan drawn by Tadataka Ino, and a Haori jacket with a hollyhock crest of the Tokugawa family, etc. During the intensive investigation that followed, Kageyasu Takahashi of the Nagasaki Magistrate, who had given the maps to Siebold, was sentenced for capital punishment. Genseki Habu, the Shogunate doctor responsible for the Shogunate Haori, was deprived of his post, and Siebold was exiled for life out of Japan.

Implicated in this conspiracy were more than 50 other Japanese friends, doctors, interpreters and tradesmen who were punished as grave criminals. Choei Takano, who was a leading disciple of Siebold, was also a victim, but fled with luck. This is known as the Siebold Incident.

Toyosuke Kawahara (1786-1865) was another victim who was punished and disappeared from Dejima, along with his art teacher Yushi Ishizaki, who was the elite official Connoisseur of the Chinese Painting of the Nagasaki Magistrate. They were simply too close to Siebold. Their indictments were for such trivial matters as the family crests of the clans in guard at Nagasaki appearing in their art pieces.

Toyosuke was referred to Siebold by Yushi as a promising painter; Siebold was eagerly waiting for the arrival of Carl Hubert de Villanueve, a French artist whom he requested as an important reinforcement to his research crew in Dejima. 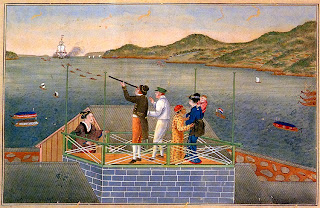 Toyosuke was hastily added to Siebold's entourage to travel Edo. He was to paint scenes of major towns and ports on the way to Edo from Nagasaki, and fauna and flora upon Siebold's request. Toyosuke learned through trial-and-error and delivered to Siebold's liking. He gradually gained confidence developing the genre, creating an east-meet-west style that not only met the scientist's demands, but deeply impressed Siebold. He eventually learned western oil painting from French artist Villanueve and applied these techniques to his figure paintings.

Most of the Siebold's collections, including 12,000 specimens, had been shipped out before the above scandal. Immediately upon his return from Japan, Siebold began sorting them and published books, first with his own money, later with the help of Leyden University and Dutch King William II. 'Bibliotheca Japonica', 'Fauna Japonica', 'Flora Japonica' came out mostly between 1830 and 1860, acclaimed as the "books of miracle". In addition to the text, 'Siebold Bibliotheca' has 367 lithograph illustrations, most of them based on Toyosuke's paintings. 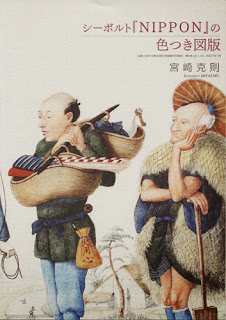 About 1,000 of Toyosuke's paintings are now at Leiden University museum and Komarov Botanical Institute Museum in St. Petersburg, the largest collection of one of the great Japanese Edo artists in Europe. He is better known in Europe than in Japan.

Toyosuke (changed his name to Keiga Taguchi after the Siebold incident) painted Russian Admiral Yevfimy Putyatin when he visited Nagasaki in 1855 on a diplomatic mission. Also, he signed the portrait of Grandma Kiku Nagashma in Nagasaki, supposedly painted in 1860. We surmise he lived until 1860.

Meanwhile, with a pardon, Siebold returned to Japan in 1859 and met his daughter Oine, and stayed until 1862. It is doubtful that Toyosuke and Siebold were ever reunited.

While searching for the contemporary painters of Toyosuke aka Keiga, I found Katsushika Hokusai (1760-1849), 25 years senior to Keiga. Hokusai, is the one and only Japanese who was included in Life's magazine "Top 100 who Made the Millennium" for his "Ukiyo-e" woodprints, including "the Great Wave and Fuji". Do not be surprised if Keiga had something to do with Hokusai avoiding subrogation in the Siebold Incident.

Hokusai was approached by both the Dejima Dutch Captain (obligated to travel to Edo from Nagasaki every four years, like the Daimyos) and Siebold to do sketches of the daily lives of Japanese. The captain paid Hokusai at the contracted price but some quarrels were recorded between Hokusai and Siebold. Siebold demanded a discount and Hokusai refused. The dispute was settled when the captain heard about it through interpreters and paid Hokusai the full price. Hokusai’s works appeared on Siebold’s encyclopedic “Nippon”.

What about Hokusai's involvement in the Siebold case? Tokugawa banned the sale of his art work to foreigners. My question is: did the Hokusai deal precede the banning because the captain's names differed (the contractor versus the payer)? Keiga might have stepped in and possibly gotten Hokusai off the hook.

If true, what a laudable act it was to let the senior Hokusai churn out his world-class ukiyo-e during his twilight years. 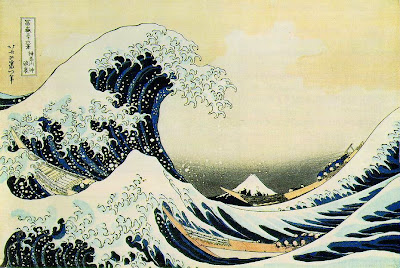 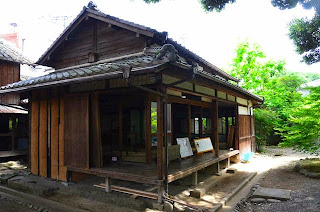 It all started with the invitation from the Tokutomi Memorial Garden of Kumamoto. "Catalpa trees are in full bloom. Please join us for flower viewing with an ocarina music concert and other entertainment." I have wanted to see the Oe School remains where Reverend Sokabe studied (see Samurai Missionary post), so I decided on a visit.

After a 2 ½ hour bus trip from Kitakyushu, I finally arrived at the Garden. The original tree that the Tokutomi brothers planted fell victim to a typhoon but the descendant trees thrived well. The Kumamoto City homepage had photos of two catalpas from; l) nearby Idegawa river bank and 2) Hishigata Elementary School, 'Uekimachi.' Both are sibling catalpas more than 100 years old. In particular, the Hishigata School catalpa is 18 meters high and the trunk measures 336 centimeters in diameter and is noted as the tallest and widest tree in the report filed by Junji Imamura, a tree doctor, contracted by the voluntary group of Hishigata School students, supported by parents and teachers.

Junji Imamura also studied DNA of the nationwide catalpas and he discovered that they propagated from the same Tokutomi seedlings. The trees studied by Imamura included the ones in Kurume (Fukuoka), Isahaya (Nagasaki), Hiroshima, Aomori and other locations. I figured catalpa numbers in Japan to be around 100. However, when I searched under "Kisasage", the Japanese name, I counted more than 100 sites showing off their catalpa trees and flowers throughout Japan. There are trees in schools, parks, temples, and herbal gardens. Now, I have revised my figures to be in the thousands, including both species of Chinese and American catalpas. I think the Chinese catalpa is called "Jishu" but I could not verify it. Here is additional information about American catalpa. 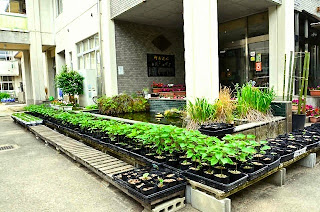 I'm fascinated with the word "catalpa", which does not sound too American. I was right; it came from "Catawba", a Native American tribe of Sioux. There is the Catawba River in North Carolina, which flows into the Santee River in South Carolina and emptying into the Atlantic. My ex-employer had a plant close to the Catawba River, 70 miles west, so I know the area. There is some coal ash ecological residue in the Catawba River Basin today. The Catawba tribe is now settled in Rock Hill, South Carolina after their relentless land claims. Another Catawba tidbit is the mysterious Catawba worms! They are great fish bait that you can find on the catalpa leaves. The worms morph into sphinx moths.

Now the mystery is of how Reverend Joseph Niijima, founder of Doshisha University, came into possession of catalpa seeds. In the late 1860s, I read that there was a kind of catalpa craze that spread from New England, Ohio, Texas to California that seemed to be associated with the railroad industry. Reverend Niijima studied at Amherst, Massachusetts and he must have seen school children planting seedlings. Catalpa today is regarded as somewhat invasive, but back in the last century, not so. In less warm states, like New England, people had to take extra care and I read they rejoiced when catalpas were resuscitated under harsh conditions, likening catalpa as a phoenix.

Getting back to Hishigata Elementary School, the school slogan is, "We have the No. l Catalpa of Japan, the symbol of the Niijima/Tokutomi bonds of friendship between teacher and students. We will strive to be No. 1 in sports, in greening of the school and soaring high as we enter society." Hishigata School Baseball team won the local baseball competition in 2013.

Here is a note I received from my friend Don:

I received a question on trees which are in USA and Japan. I am gathering information. They seem to like warm, wet weather and are not prevalent in the cold northern climates. I will check with my friend in South Carolina. Meantime I am also checking out an American city named AZUSA near Los Angeles. I believe it is a tree, similar to what Yokohama has for its main street, ISEZAKI-cho.

The history says Japan used it for the bow of the Samurai. In America, we do not have info on usage. But ISEZAKI tree is much like AZUSA word. And the BOW was very important with Algonquin (“Are Kan Quayn" to be the bow and flint arrow point - the original name for America before Columbus).

The Catawba tree had fruit that natives used for fish bait because they resembled worms. It is also called a "fish bait tree" in the Carolinas.

Near Alabama the Indians had an area named TUSKEGEE. The history says it may have meant "warrior". I think it relates to TSUKA in Japanese for "a mound". These people were also known as "mound builders" and these mounds of earth are seen in many places throughout the Midwest. It would be "Mound trees---Tsuka Ki ga".

Posted by riodan at 1:51 PM No comments: